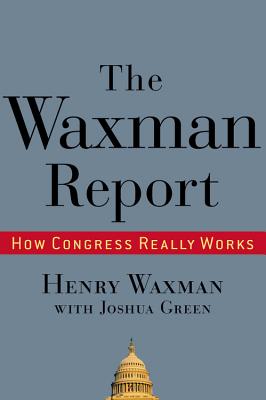 At a time when some of the most sweeping national initiatives in decades are being debated, Congressman Henry Waxman offers a fascinating inside account of how Congress really works by describing the subtleties and complexities of the legislative process.

For four decades, Waxman has taken visionary and principled positions on crucial issues and been a driving force for change. Because of legislation he helped champion, our air is cleaner, our food is safer, and our medical care better. Thanks to his work as a top watchdog in Congress, crucial steps have been taken to curb abuses on Wall Street, to halt wasteful spending in Iraq, and to ban steroids from Major League Baseball. Few legislators can match his accomplishments or his insights on how good work gets done in Washington.

In this book, Waxman affords readers a rare glimpse into how this is achieved-the strategy, the maneuvering, the behind-the-scenes deals. He shows how the things we take for granted (clear information about tobacco's harmfulness, accurate nutritional labeling, important drugs that have saved countless lives) started out humbly-derided by big business interests as impossible or even destructive. Sometimes, the most dramatic breakthroughs occur through small twists of fate or the most narrow voting margin. Waxman's stories are surprising because they illustrate that while government's progress may seem glacial, much is happening, and small battles waged over years can yield great results.

At a moment when so much has been written about what's wrong with Congress-the grid­lock, the partisanship, the influence of interest groups-Henry Waxman offers sophisticated, concrete examples of how govern­ment can (and should) work.

Congressman Henry Waxman has represented the Los Angeles area of California since 1974. He is the Chairman of the Committee on Oversight and Government Reform and a member of the Committee on Energy and Commerce. During his thirty-plus years in Congress, he has helped craft landmark legislation addressing health and the environment.

"A very readable insider's account... Waxman's conviction that government can better the lives of citizens is uplifting and strengthened by his record of implementing landmark legislation... the explanation of the workings of a widely misunderstood government body is a public service from a committed civil servant."
-Publishers Weekly

A welcome look at the internal workings of the legislative branch-- essential for political junkies.
-Kirkus

"Pretty faces and promising careers tend to flash across our local political firmament with the frequency of shooting stars -- and with about as much effect. But for more than two decades, the most consequential elected official in Southern California has been a short, bald, decidedly mustached congressman from Los Angeles' Westside named Henry Waxman . . . the congressman, now 69, has, along with his collaborator Joshua Green of the Atlantic magazine, produced something unexpected and rather fine. THE WAXMAN REPORT is part compelling memoir, part fascinating, shrewd civics lesson and part bracing statement of practical idealism. It's impossible to put down and a joy to read -- a model, in fact, of lucid exposition. If your plans for the long Independence Day weekend incline toward thoughts on the state of the nation, skip all the patriotic kitsch and read this book . . . The timing is fortuitous, because Waxman is more than ever at the center of events, since the House Energy and Commerce Committee, which he chairs, shares jurisdiction over the energy and healthcare issues key to President Obama's agenda . . . One of the pleasures of THE WAXMAN REPORT is tracing the origins of these signature traits to his Los Angeles boyhood . . . Most of all, it's a detailed inside account of just how the nation's laws are made. It succeeds as storytelling because Waxman and Green have structured most of the book as a series of narrative examples built around major bills. Thus chapters are titled, for instance, 'HIV/AIDS and the Ryan White Act,' 'The Orphan Drug Act,' 'The Clean Air Act' and 'The Tobacco Wars.' There's a fascinating chapter on baseball and steroids as well. Most of all, there's a persuasive declaration of faith in that particular brand of liberalism that the late Arthur Schlesinger called 'the politics of remedy.' As Waxman puts it, 'In Boyle Heights, everyone thought of government as an institution that helped people' . . . As this heartfelt, important little book will remind its readers, there's a lot to be said for the faith of our fathers."
-Los Angeles Times