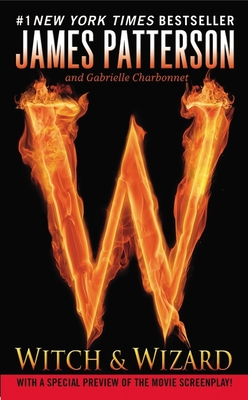 This is book number 1 in the Witch & Wizard series.

Dystopian future stories are some of my absolute favorites, and the suspense in this one made it nearly impossible to put down. Whit and Wisty Allgood reside in a world where society has been overly regulated by the government, and whose leading political party, The New Order, has declared magic illegal. When everything they hold dear is put at risk of extinction, the siblings realize the only way to stop The New Order’s tyrannical reign is to fight it. If you’re looking for a YA read similar to titles such as Divergent or The Maze Runner, this is a perfect choice for you! — From Kellsie's Picks

When a dystopian government controls every aspect of society, siblings Wisty and Whit Allgood may be the world's only hope in this magical beginning of James Patterson's Witch & Wizard series.
Everything is about to change. The government has seized control of every aspect of society, and this is the astonishing story of Wisty and Whit Allgood, a sister and brother who were torn from their family in the middle of the night, slammed into prison, and accused of being a witch and a wizard. Thousands of young people have been kidnapped; some have been accused; many others remain missing. Their fate is unknown, and the worst is feared-for the ruling regime will stop at nothing to suppress life and liberty, music and books, art and magic . . . and the pursuit of being a normal teenager.

RAVES FOR THE PAGETURNERS!

"Fights and flights are non-stop in Maximum Ride. The writing is visual and cinematic--things that kids expect from their video games, TV cartoon shows and action movies."
—USA Today

"Patterson is not just for adults anymore. With the Maximum Ride series he has created edgy, taut thrillers that teens won't be able to put down. The characters are easy to identify with and I can't wait to see what happens to Max and her family next!"—Cathy, Bookseller, Blue Willow Bookshop