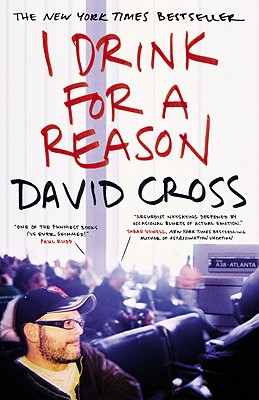 By David Cross
$16.99
Not Available In-Store - Usually Ships from Warehouse in 1-5 Days

Arrested Devolopment is one of my favorite shows, so when I read that Tobias "never-nude" Funke (Cross's character) had a book out, I was psyched. There were multiple times while reading that I laughed out loud, "YouStar.com" being a particular favorite. While many find his humor irreverent, I love that he speaks his mind with no apologies. - Danielle

The star and creative force behind Mr. Show and Arrested Development pens his "first and final book, chronicling his meteoric rise and abysmal fall in the literary world."
After a decade spent in isolation in the Ugandan jungles thinking about stuff, David Cross has written his first book. Known for roles on the small screen such as "never-nude" Tobias Funke on Arrested Development and the role of "David" in Mr. Show With Bob And David, as well as a hugely successful stand-up routine full of sharp-tongued rants and rages, Cross has carved out his place in American comedy. Whether deflating the pomposity of religious figures, calling out the pathetic symbiosis of pseudo-celebrity and its leaching fandom, or merely pushing the buttons of the way-too-easily offended P.C. left or the caustic, double-standard of the callous (but funnier) right, Cross has something to say about everyone, including his own ridiculous self.

Now, for the first time, Cross is weaving his media mockery, celebrity denunciation, religious commentary and sheer madness into book form, revealing the true story behind his almost existential distaste of Jim Belushi ("The Belush"), disclosing the up-to-now unpublished minutes to a meeting of Fox television network executives, and offering up a brutally grotesque run-in with Bill O'Reilly. And as if this wasn't enough for your laughing pleasure in these troubled times, some of the pieces splinter off with additional material being created online in exclusive video and animated web content created solely for the book-a historical first (presumably)!

With a mix of personal essays, satirical fiction posing as truth, advice for rich people, information from America's least favorite Rabbi and a top-ten list of top-ten lists, I Drink for a Reason is as unique as the comedian himself, and cannot be missed.

David Cross is a two-time award winner as well as a three-time award winner. He was part of Mr. Show and Arrested Development. He has done, and still does, stand-up comedy. He is a jew/atheist originally from Atlanta. He speaks four languages, and three dialects. He writes, loves, and eats in the NYC area. He is a Red Sox fan. In fact, he has a dog named Ollie Red Sox. He is a true patriot and a great American. He is currently fucking Amber Tamblyn.

"One of the funniest books I've ever skimmed!"
--Paul Rudd

"David has composed a fascinating list of the most obscure names in Atlanta baseball history, and filled the spaces between with some stuff. I don't always agree with him, but he always makes me think and smile and, unlike our conversations, in this book I actually can get a word in edgewise."
--Keith Olbermann

"A relentlessly funny insight into what makes David Cross honest and brutal, but above all, hilarious...pant-wettingly brilliant."
--Simon Pegg

"It is inappropriate for me to write a 'blurb' for Mr. David Cross, as he is rightly a legend--utterly fearless, absolutely brilliant, and a longtime inspiration to me. My endorsement would be like the weed endorsing the sun, which is to say: I live in the dirt and require David Cross (plus water) to live. But I can grow right through sidewalks, so that's something."
--John Hodgman, Daily Show "Resident Expert" and New York Times bestselling author of The Areas Of My Expertise

"A few more books like this one, and we may have to get David to pull a Sen. Al Franken."
--Markos Moulitsas, founder of Daily Kos

"This book is a literary 'Development' from David that I found truly 'Arresting'. I 'dev'oured every word and had to take 'a rest' after reading as I realized this book was 'ment' [sic] to be a comedy classic. This 'Arresting' comedian has 'Developed' into an amazing and insightful writer."
--Mitchell Hurwitz, producer, Golden Girls

"...me again. I'm sorry, but there's something about David's wit and hilarious self-revelation that makes me want to jacket-blurb all over this thing. David's writing in this 'audio-book for the eyes' is every bit as funny, honest, and observant as the man himself-and, oddly, twice as smart. It's surprising and funny dot dot dot a triumph! Oh, and David that 'dot dot dot' shouldn't be spelled out as words. It's just meant to imply I said a lot of other stuff too. Oh and obviously what I'm saying right now also isn't part of the blurb."
--Mitchell "Arrested Development" Hurwitz, co-creator, The Ellen Show

"David Cross is the Bruce Banner of our time, and this book is his big green monster. His energy is so intoxicating and uplifting that in some cultures his discarded bodily fluids are sold on the black market as an Irish coffee substitute. This is a great book."
--Maynard Keenan, lead singer of Tool and A Perfect Circle
My Account • Sign In • Sign Out • Register
NEW & USED BOOKS
AUTHOR EVENTS • GIFTS
Tempe
6428 South McClintock Drive
480.730.0205
[Google Map]
10am-7pm daily
Trade Counter 11am-6pm daily