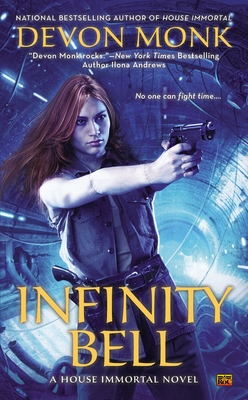 By Devon Monk
$7.99
Not Available In-Store - Usually Ships from Warehouse in 1-5 Days

This is book number 2 in the A House Immortal Novel series.

Return to national bestselling author Devon Monk's heartpounding House Immortal series, where eleven powerful Houses control the world and all its resources. But now, the treaty between them has been broken, and no one—not even the immortal galvanized—is safe....

Matilda Case isn’t normal. Normal people aren’t stitched together, inhumanly strong, and ageless, as she and the other galvanized are. Normal people’s bodies don’t hold the secret to immortality—something the powerful Houses will kill to possess. And normal people don’t know that they’re going to die in a few days.

Matilda’s fight to protect the people she loves triggered a chaotic war between the Houses and shattered the world’s peace. On the run, she must find a way to stop the repeat of the ancient time experiment that gifted her and the other galvanized with immortality. Because this time, it will destroy her and everything she holds dear.

Caught in a cat-and-mouse game of lies, betrayal, and unseen foes, Matilda must fight to save the world from utter destruction. But time itself is her enemy, and every second brings her one step closer to disaster....

Devon Monk is the national bestselling author of two urban fantasy series, Allie Beckstrom (Magic for a Price; Magic Without Mercy) and Broken Magic (Stone Cold; Hell Bent), as well as the author of the Age of Steam steampunk series (Cold Copper; Tin Swift). When she's not writing, Devon knits silly things and lives in Oregon with her husband, two sons, and a dog named Mojo.

Praise for Devon Monk and her novels