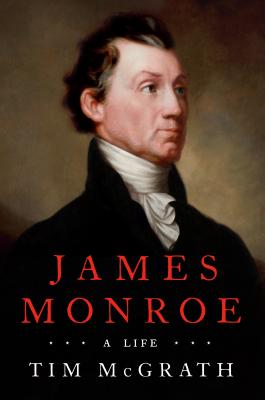 The extraordinary life of James Monroe: soldier, senator, diplomat, and the last Founding Father to hold the presidency, a man who helped transform thirteen colonies into a vibrant and mighty republic.

“A first-rate account of a remarkable life.” —Jon Meacham, Pulitzer Prize-winning author of The Soul of America

Monroe lived a life defined by revolutions. From the battlefields of the War for Independence, to his ambassadorship in Paris in the days of the guillotine, to his own role in the creation of Congress's partisan divide, he was a man who embodied the restless spirit of the age. He was never one to back down from a fight, whether it be with Alexander Hamilton, with whom he nearly engaged in a duel (prevented, ironically, by Aaron Burr), or George Washington, his hero turned political opponent.

This magnificent new biography vividly recreates the epic sweep of Monroe’s life: his near-death wounding at Trenton and a brutal winter at Valley Forge; his pivotal negotiations with France over the Louisiana Purchase; his deep, complex friendships with Thomas Jefferson and James Madison; his valiant leadership when the British ransacked the nation’s capital and burned down the Executive Mansion; and Monroe’s lifelong struggle to reckon with his own complicity in slavery. Elected the fifth president of the United States in 1816, this fiercest of partisans sought to bridge divisions and sow unity, calming turbulent political seas and inheriting Washington's mantle of placing country above party. Over his two terms, Monroe transformed the nation, strengthening American power both at home and abroad.

Critically acclaimed author Tim McGrath has consulted an extensive array of primary sources, many rarely seen since Monroe's own time, to conjure up this fascinating portrait of an essential American statesman and president.

Tim McGrath is a two-time winner of the Commodore John Barry Book Award, as well as the author of the critically acclaimed biography John Barry: An American Hero in the Age of Sail, and Give Me a Fast Ship: The Continental Navy and America's Revolution at Sea, recepient of the Samuel Eliot Morison Award for Naval Literature. He lives outside of Philadelphia.

“This is a welcome and long-overdue portrait of an essential American. Soldier, diplomat, and president, James Monroe was a vital figure in the early Republic, and Tim McGrath has given us a first-rate account of a remarkable life.” —Jon Meacham, Pulitzer Prize-winning author of Thomas Jefferson: The Art of Power and American Lion: Andrew Jackson in the White House

“As Tim McGrath deftly demonstrates in this nimbly written and meticulously researched biography, there is much more to James Monroe than the famous doctrine that bears his name. This is the captivating story of a president who, after gaining his political reputation amid the partisan battles of the early republic, did his best to bring a nation together. That Monroe was only partially successful makes his presidency all the more relevant to our own contentious times. Highly recommended.” —Nathaniel Philbrick, New York Times bestselling author of Mayflower and In the Heart of the Sea

“Tim McGrath’s James Monroe fills out a luminous portrait of the most underappreciated of our Founders. In this comprehensive new biography, McGrath colorfully portrays the man whose ambition transformed the shape and character of our nation. Monroe will be underappreciated no more.” —Joel Richard Paul, author of Without Precedent: Chief Justice John Marshall and His Times

“James Monroe has long stood in the historical shadow of Washington, Jefferson, and Jackson. In this full and fascinating new life, Tim McGrath gives Monroe his due, demonstrating how Monroe’s talents and energy helped guide America from the aristocratic age of Washington to the democratic age of Jackson.” —H. W. Brands, New York Times bestselling author of The Man Who Saved the Union and Heirs of the Founders

“That a president like James Monroe, who was the fiercest of partisans, could become a bridge-builder gives us hope in this era of fierce partisanship. Tim McGrath has given us a story for today.” —Larry Tye, New York Times bestselling author of Bobby Kennedy: The Making of a Liberal Icon

“McGrath draws a convincingly complex portrait of this first of the post-Founder presidents, a figure who more than any other in his era gave preliminary shape to both the office and the nation on the world stage. All of Monroe’s successors would live in the framework of the presidency he erected. This, too, is an ambiguous legacy—and McGrath is cautiously aware of that fact.”—The Christian Science Monitor