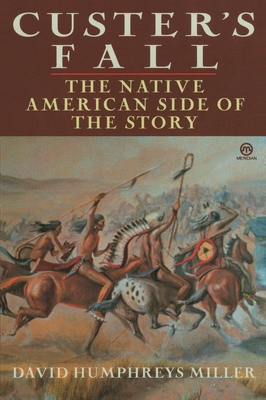 The true story of the Battle of Little Bighorn—told from the perspective of the native americans who fought in Custer's Last Stand.

The day began with the killing of a ten-year-old Native American boy by U.S. cavalry troopers. Before it ended, all of those troopers and their commander, George Armstrong Custer, lay dead on the battlefield of the Little Big Horn—the worst defeat ever inflicted by Native Americans on the U.S. military. Now, the full story of that dramatic day, the events leading up to it, and its aftermath are told by the only ones who survived to recount it—the Native Americans.

Based on the author’s twenty-two years of research, and on the oral testimony of seventy-two Native American eyewitnesses, Custer’s Fall is both a superbly skillful weaving of many voices into a gripping narrative fabric, and a revelatory reconstruction that stands as the definitive version of the battle that became a legend and only now emerges as it really was.

David Miller’s entire 36-year military career in the British Army was spent under the threat of the Cold War. A journalist and author, he has published 25 books, mostly on military history. He lives in Australia.

“The excitement, the carnage, and tales of bravery are here for every lover of Indian drama.”—Library Journal

“One of the most important accounts of Custer’s ‘last stand’...as illuminating as it is controversial.”—Paul Andrew Hutton, University of New Mexico