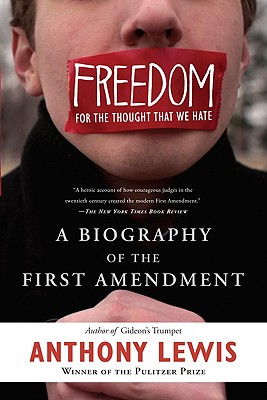 From one of the most influential journalists of the last half century, an essential explanation and defense of a foundational American idea: free speech

More than any other people on earth, we Americans are free to say and write what we think. The press can air the secrets of government, the corporate boardroom, or the bedroom with little fear of punishment or penalty. This extraordinary freedom results not from America's culture of tolerance, but from fourteen words in the constitution: the free expression clauses of the First Amendment.

In Freedom for the Thought That We Hate, two-time Pulitzer Prize-winner Anthony Lewis describes how our free-speech rights were created in five distinct areas: political speech, artistic expression, libel, commercial speech, and unusual forms of expression such as T-shirts and campaign spending. It is a story of hard choices, heroic judges, and the fascinating and eccentric defendants who forced the legal system to come face to face with one of America's great founding ideas.

Anthony Lewis (1927-2013), a two-time winner of the Pulitzer Prize, was a columnist for the New York Times op-ed page from 1969 through 2001. In addition to his long and distinguished career with the Times, Mr. Lewis was, starting in 1983, the James Madison Visiting Professor at Columbia University. He was the author of two other books, Gideon's Trumpet and Make No Law.

Mr. Lewis does a remarkable job of presenting the history and scope of freedom of thought...a concise and wise book."—Economist

"[Lewis] looks behind the printed page to scrutinize the experiences and values of the men and women whose utterances are given the force of law. The result is a short history of the First Amendment that is always illuminating and sometimes rollicking."—Los Angeles Times

"Lewis blends a profound understanding of First Amendment jurisprudence and history with an enjoyable writing style that his readers have long come to admire. In our war-torn era where dissent and open-minded debate have become problematic, Lewis compels us to remember the crucial function free speech serves in our democratic form of government."—Christian Science Monitor

"It's hard to imagine a book about legal history reading like a page-turner, but this one does. The Supreme Court justices whose decisions have shaped our country emerge as conflicted and principled human beings. The questions that have yet to be settled press impatiently against the book's pages, reminding us that the First Amendment continues to shift under our feet even as we read."—Providence Journal