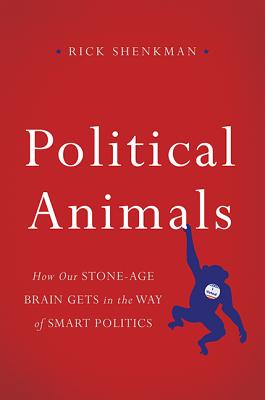 By Rick Shenkman
Email or call for price

Can a football game affect the outcome of an election? What about shark attacks? Or a drought? In a rational world the answer, of course, would be no. But as bestselling historian Rick Shenkman explains in Political Animals, our world is anything but rational. Drawing on science, politics, and history, Shenkman explores the hidden forces behind our often illogical choices.

Political Animals challenges us to go beyond the headlines, which often focus on what politicians do (or say they'll do), and to concentrate instead on what's really important: what shapes our response. Shenkman argues that, contrary to what we tell ourselves, it's our instincts rather than arguments appealing to reason that usually prevail. Pop culture tells us we can trust our instincts, but science is proving that when it comes to politics our Stone Age brain often malfunctions, misfires, and leads us astray.

Fortunately, we can learn to make our instincts work in our favor. Shenkman takes readers on a whirlwind tour of laboratories where scientists are exploring how sea slugs remember, chimpanzees practice deception, and patients whose brains have been split in two tell stories. The scientists' findings give us new ways of understanding our history and ourselves -- and prove we don't have to be prisoners of our evolutionary past."

In this engaging, illuminating, and often riotous chronicle of our political culture, Shenkman probes the depths of the human mind to explore how we can become more political, and less animal.

CapX
“In this engaging, illuminating and often humourous portrait of our political culture, Shenkman probes the depths of the human mind to reveal what we must do to fix our floundering democracy, and to become more political, less animal.”

Christopher Parker, Professor of Political Science, University of Washington
“Rick Shenkman does it again! In Political Animals, his latest—and best—book, Shenkman proffers to explain why voters so often veer away from what seems politically rational. He does so by synthesizing political science, neuroscience, evolutionary psychology, and history to great effect. This book is essential reading for anyone even remotely interested in grasping the roots of the political circus in which the current GOP stars.”

Avi Tuschman, author of Our Political Nature: The Evolutionary Origins of What Divides Us
“Political Animals takes readers on an insightful tour of political irrationality over the course of American history, bringing embarrassing political misjudgments into the light of fascinating findings from behavioral economics, evolutionary psychology, and the life sciences. In doing so, Shenkman shows us how we can sharpen our political perceptions and improve, each in our own small way, the future of our democracy.”

George E. Marcus, Professor of Political Science, Williams College
“A fascinating, well-told account of how our nature both prepares and ill-prepares us for politics in the modern age.”

Leonard Steinhorn, Professor of Communication and Affiliate Professor of History, American University
“Politics in America has this Alice in Wonderland quality: what makes sense often doesn't happen, and what happens often doesn't make sense. Drawing on science, history, psychology, mounds of evidence and political insight, Rick Shenkman's masterful book shows us why. What Malcolm Gladwell's The Tipping Point does for society, Political Animals does for politics.”

Murray Polner, author of No Victory Parades: The Return of the Vietnam Veteran and co-author of Disarmed and Dangerous, a biography of Daniel & Philip Berrigan
“Rick Shenkman's Political Animals is an engrossing and unique book aimed at understanding our complex and bewildering political world and our inherited myths, lies, and quick-fix solutions that more than often than not end up disastrously in appalling conflicts at home and abroad. Relying upon innovative studies in neuroscience and evolutionary psychology as well as history, and backed by fascinating studies of presidents, people and events, Shenkman offers serious suggestions for overcoming our delusions, historical ignorance, and groupthink.”

Walter G. Moss, Professor Emeritus of History, Eastern Michigan University and author of An Age of Progress? Clashing Twentieth-Century Global Forces
“In Political Animals, historian Rick Shenkman makes excellent use of the latest research in behavioral sciences to indicate why we Americans so often fail politically. And in highly readable prose he also provides wise advice on how we can do better.”

Bookforum
“Timed almost perfectly, Rick Shenkman's Political Animals seeks to explain our erratic political behavior using a different lens, one that focuses on the role evolution plays in how we choose our leaders.... [Shenkman's] conclusions are far from flattering to our intellectual vanity, but he draws on a wealth of evidence, demonstrating just how abject our dependence on our Stone Age brain can be.... Telling self-proclaimed rational voters they unknowingly punished a politician for an act of God or an NFL franchise's post-season collapse seems ludicrous and insulting, but Shenkman's case is compelling.”

Kirkus
“Readers will appreciate [Shenkman's] personable, chatty tone and will delight in the broad allusions and the wide variety of historical incidents he cites to help make his point… he makes a convincing case about our hard-wired infirmities and how they work to undermine our democracy. An amiable tour of the socioscientific evidence that accounts for our political miscalculations.”