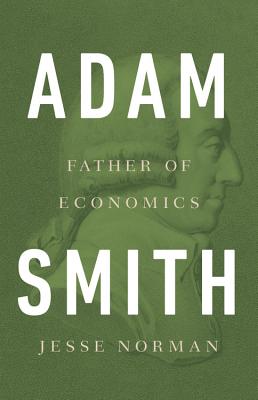 Adam Smith (1723-1790) is now widely regarded as the greatest economist of all time. But what he really thought, and the implications of his ideas, remain fiercely contested. Was he an eloquent advocate of capitalism and individual freedom? A prime mover of "market fundamentalism"? An apologist for human selfishness? Or something else entirely?

In the tradition of The Worldly Philosophers, Adam Smith dispels the myths and caricatures, and provides a far more complex portrait of the man. Offering a highly engaging account of Smith's life and times, political philosopher Jesse Norman explores his work as a whole and traces his influence over two centuries to the present day. Finally, he shows how a proper understanding of Smith can help us address the problems of modern capitalism. The Smith who emerges from this book is not only the greatest of all economists but a pioneering theorist of moral philosophy, culture, and society.

Jesse Norman, MP, studied at Oxford University and took his master's and doctorate in philosophy from University College London. He has been an honorary fellow at UCL, a governor of the UK National Institute of Economic and Social Research, and a visiting fellow at All Souls College, Oxford. His previous books include the widely acclaimed Edmund Burke: The First Conservative.

"Very readable...[Norman] does a fine job of applying Smith's thinking to a number of such modern challenges. In all, he never loses sight of Smith's implicit injunction to think more broadly than just economics."—Forbes

"A wise book accessible to the general reader...You'll want to read Mr. Norman and then Smith if you have any thought at all of getting beyond the clichés of left and right...Engaging, intelligent, educational."—Wall Street Journal

"Remarkable and intensely readable.... Norman is a Conservative MP, and the very existence of the book, which draws on his background as a philosopher but also displays wide knowledge of economics and the history of the Enlightenment in 18th-century Edinburgh, is a rejoinder to those who fear that the intellectual has disappeared from politics, along with respect for facts and contact with reality."—Financial Times

"In this splendid book, Jesse Norman not only presents an excellent introduction to the life and ideas of Adam Smith, but also explains why - and how - Smith's insights can help us solve some of the most difficult social and economic problems of the contemporary world. Smith loved lucidity and relevance, and I think he would have been very happy with Norman's book."—Amartya Sen, Nobel Laureate in Economics

"A worthy addition to the literature surrounding Smith and that of modern conservative thought."—Kirkus Reviews (starred review)

"Well-written, well-argued, and intensely thought-provoking.... I hope some of the author's parliamentary colleagues summon up the moral and intellectual strength to read it."—Simon Heffer, Spectator

"Norman has written a wonderfully clear account of the life and thought of Adam Smith."—Sunday Times

"I can't recommend this biography too highly."—Dan Hannan, Sunday Telegraph

"Norman's book...critiques what he calls 'crony capitalism'--a system he believes Adam Smith would have detested.... Accomplished and eloquent."—New Statesman

"It is a cause for rejoicing that we live in a country in which a front-line politician like Jesse Norman has the capacity and the energy to write an important work of revisionist biography with a direct and important impact on the intellectual underpinnings of liberal free-market thought. If we want to be well governed, we need to be governed by people who have the capacity not merely to act but also to think--and Jesse Norman, as this book amply demonstrates, is one of those people.... A wide-ranging, beautifully written book."—Oliver Letwin, Telegraph

"Masterly.... Smith's thinking, properly understood, holds vital lessons for the greatest questions in modern political economy.... The book tells the reader something else too: that amid the superficiality and hysterics of modern British politics, an admirably thoughtful brain is lurking."—Edward Lucas, The Times (UK)

"A compelling, original and well-judged exploration of the great thinker's life and ideas.... We need more people like Norman in politics."—Julian Glover, Evening Standard

"[Norman's] book is partly devoted to rescuing Smith from the misconceptions and simplifications of his fans, and trying to capture the real range and complexity of his thought...something badly needed in British politics."—Times Higher Education

"Norman is an excellent tutor for an intellectual journey of this kind. One topic leads gracefully into the next, nothing goes on for too long and even the modern economists become comprehensible."—Andrew Gimson, Conservative Home

"[Norman is] thinking though his politics in an unusually thorough fashion...The British people are fortunate to have him."—David Warsh, Economic Principals

"Jesse Norman tackles head on the challenges politicians and business leaders face in trying to rebuild trust in markets and capitalism as the best means to deliver national income, wealth, investment, job creation and prosperity.... Lucidly written, compellingly argued, this is a significant book at a crucial moment in Britain's history. One can but hope it is read widely and the challenge embraced willingly by those who determine our future."—Mark Fox, Reaction

"Jesse Norman has brought his keen eye and unique experience to a notoriously difficult subject, and the result is an exceptionally insightful new guide to Adam Smith. As Norman brilliantly shows, both Smith's economics and our own must be understood as an extension of moral philosophy."—Yuval Levin, author of The Fractured Republic

"Jesse Norman provides two outstanding biographies for the price of one: a beautiful and original account of Adam Smith's life, well grounded in the epochal events of the eighteenth century enlightenment; and a penetrating and fresh account of the subsequent life of Smith's main idea, the central role of exchange in shaping human society."—Matt Ridley, author of The Evolution of Everything

"Adam Smith is often associated with the powerful idea of the 'invisible hand' of the market, which became the bedrock of modern economics. But this brilliant idea doesn't come close to doing justice to his thinking. He anticipated how the unchecked power of employers can lead to monopoly, inefficiency and inequality. He understood how political systems that restrain rulers and the privileged are crucial for a healthy society and vibrant economy. He fully recognized, in contrast to how he is sometimes remembered in popular discussions, the complexities of ethical behavior and responsibilities. This wonderfully readable book by Jesse Norman brings Smith's sophisticated, eye-opening philosophy to modern readers."—Daron Acemoglu, co-author of Why Nations Fail: The Origins of Power, Prosperity, and Poverty

"Adam Smith is one of the world's greatest and least understood thinkers, and we may need him now, more than ever. Norman's beautifully written book offers an energetic and clear-headed overview, with a host of fresh and valuable insights. Highly recommended!"—Cass Sunstein, Harvard University

"A splendid introduction to [Smith's] life and lasting influence...This scholarly and well-crafted book will impart pleasure and knowledge to a range of readers...Highly recommended."—Library Journal

"[Norman] is a sure guide to the range, complexity, and influence of Smith's work."—Choice