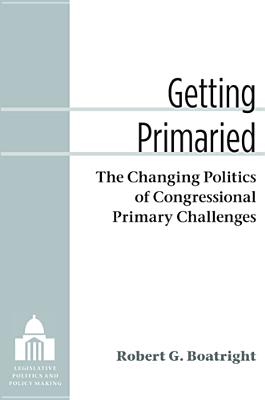 By Robert G. Boatright
Email or call for price

Each of the past few election cycles has featured at least one instance of "primarying," a challenge to an incumbent on the grounds that he or she is not sufficiently partisan. For many observers, such races signify an increasingly polarized electorate and an increasing threat to moderates of both parties.

In Getting Primaried, Robert G. Boatright shows that primary challenges are not becoming more frequent; they wax and wane in accordance with partisan turnover in Congress. The recent rise of primarying corresponds to the rise of national fundraising bases and new types of partisan organizations supporting candidates around the country. National fundraising efforts and interest group–supported primary challenges have garnered media attention disproportionate to their success in winning elections. Such challenges can work only if groups focus on a small number of incumbents.

Getting Primaried makes several key contributions to congressional scholarship. It presents a history of congressional primary challenges over the past forty years, measuring the frequency of competitive challenges and distinguishing among types of challenges. It provides a correction to accounts of the link between primary competition and political polarization. Further, this study offers a new theoretical understanding of the role of interest groups in congressional elections.

Robert G. Boatright is Associate Professor of Political Science at Clark University. He is the author of Interest Groups and Campaign Finance Reform in the United States and Canada (University of Michigan Press).