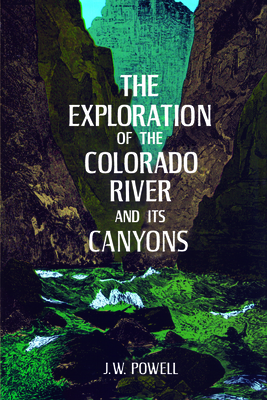 The time is 1 p.m., May 24, 1869. The place: the Green River portage, in present-day Wyoming. The personnel are ten: Major John W. Powell, one-armed Civil War veteran, later head of the U. S. Geological Survey) and nine geologists, geographers, scouts, and adventurers. Their assignment: to fill in the last white space on the map, to explore the last great unmapped and unknown part of the continental United States.
No man has ever descended the Colorado River -- some 1,000 miles cut through impassable badlands. It is known that there are other rivers in the area, like the Dirty River and the Grand River, but their interrelationships are unknown. What lies along the course of the Colorado as it flows between cliffs 5,000 feet high on either side? Some say that there are waterfalls that dwarf Niagara; others that there are impassable rapids; others that the river flows underground; others say that it is a smooth placid stream, lined by horizon-reaching fields of wild wheat. No one knows, not even the Indians.
Major Powell wrote the account of this remarkable expedition, and his narrative is one of the great classics of exploration, as thrilling as the feat itself. As we follow Powell's journal (expanded for publication), we find the ten men sailing through wild waters, momentarily expecting rapids around the next bend; and finding rapids, throwing out drag anchors, while one advanced boat tries to find through-flowing channels. We see mutiny, as three men refuse to face the perils any longer and desert -- to be massacred by the hostile Indians. Famine -- the beans are sprouting, the apples are fermenting, and the flour has gone moldy. Yet six men finally emerged, after 95 days of peril and a new continent of experience was recorded.
This is the only uncut version of Powell's narrative that has been printed in the many years. It even includes the full text of the later 1870 expedition along the Uinta, where Powell rediscovered the Pueblo Indians. It also contains Powell's later reflections on the expedition, omitted in other editions.