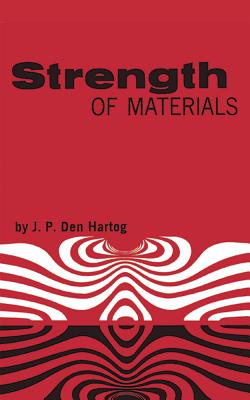 Among introductory texts on the strength of materials, this work is particularly distinguished. It was originally developed by Professor Den Hartog to meet the needs of engineering students at M.I.T. for a sound yet lucid first course in strength of materials. As such it has also enjoyed wide popularity in engineering schools throughout the world.
But the book was remarkable in a number of other ways, so that it has become one of the favorite refresher and reference works for engineers as well as a popular self-study text. Perhaps the chief reason for this is that in addition to all the customary elementary material on the subject (i.e., clear instructions to the fundamentals of tension, torsion, bending, compound stresses, deflection of beams, etc.) it also contains a considerable amount of more advanced material concerning methods of great practical value to working engineers which are not usually included in introductory texts. This material is presented in starred sections (which may be omitted on a first reading without interrupting the flow of the presentation) and includes a full treatment of the Mohr circle and its application to the determination of moments of inertia and strains as well as stresses; a lucid elementary presentation of the theory of the center of shear; and one of the few elementary presentations of the theory of the center of shear; and one of the few elementary discussions of the Myosotis method of calculating beam deflections, a method which often possesses considerable advantages over the more usual methods involving moment-area or the differential equation of bending.
Other material not usually found in elementary texts but which are frequently of great value to the practicing engineer are the discussions of the statically indeterminate truss, reinforced concrete, plastic deformations, thick-walled cylinders, thick curved bars, Maxwell's Reciprocal Theorem, and photoelasticity.
In all sections, both general principles and concrete applications are given. Another feature which readers have found unusually helpful is the 85-page section of 350 problems which gives the student practice in techniques and further illustrates applications. All problems are complete with answers.

J. P. Den Hartog: The Reprint Engineer J. P. Den Hartog (1901-1989), who taught for most of his career at MIT, was one of the founders of the Dover reprint program in engineering. As the author of several books that Dover reprinted and still has in print, and as an advisor from the 1950s until just a few years before his death in 1989, Professor Den Hartog gave invaluable advice concerning books of lasting interest and importance in his field. Not many books in engineering have a productive shelf life spanning several decades. Among the exceptions are these four books of Professor Den Hartog, which Dover reprinted and occasionally revised in later printings from 1961 through 1987: Mechanics, 1961, Strength of Materials, 1961, Mechanical Vibrations, 1985, and Advanced Strength of Materials, 1987. Still widely read and cited by authors in these areas, Den Hartog's books are a tribute to his gift for exposition and clarity. The J. P. Den Hartog Award, established in 1987, is presented in recognition of lifetime contributions to the teaching and practice of vibration engineering.