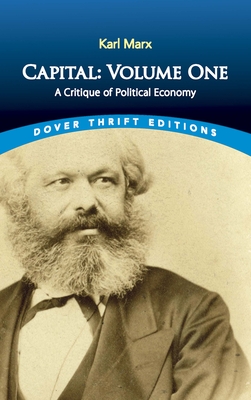 Capital: Volume One by Karl Marx is a classic of political economics and was described by Friedrich Engels, the author's friend and collaborator, as "the bible of the working class." Thirty years in the making, this 1867 publication was the first in the three-part Das Kapital series and the only volume published during Marx's lifetime. The polemic asserts that society is advancing from primitive economic systems toward the utopian state of communism.
It remains a work of tremendous importance and influence and offers an astute critique of capitalism, exploring commodities, value, money, and other factors related to the system's historic origins and contemporary functions. The examination of these elements forms the basis of Marxist doctrine: the system is irredeemable, a revolution is imperative, and a socialist system is the only viable alternative, providing a structure in which production serves the needs of all rather than the enrichment of the elite.

Philosopher and radical thinker Karl Marx (1818-74) was expelled from Germany and France after publishing controversial material, including The Communist Manifesto, which he co-wrote with Friedrich Engels. In 1848, he was exiled to London, where he wrote Das Kapital and resided for the remainder of his life.