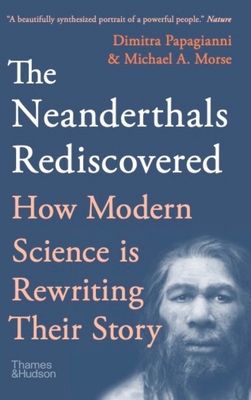 “The first complete chronological narrative of the species from emergence to extinction. . . .[A] gem.” —Nature

Winner of the Society for American Archaeology Book Award, The Neanderthals Rediscovered is a fascinating study of the Neanderthals, informed by the latest scientific developments and discoveries, now available as an updated paperback.

The Neanderthals’ story has been transformed thanks to new discoveries and paradigm-shattering scientific innovations. We can now trace their evolution in Europe and spread across Asia, study their DNA, and piece together how they lived and died.

Far from the old stereotypes, Neanderthals’ behavior was surprisingly modern: they buried their dead, cared for their sick, hunted large animals, used red pigment, and spoke.

If Neanderthals were so advanced, why did they die out and Homo sapiens survive? By looking at the full Neanderthal story, we can better address the biggest mystery of all: what it means to be human.

Michael A. Morse is the author of How the Celts Came to Britain. They both live in New York State.

Dimitra Papagianni has taught courses on the Neanderthals at the Universities of Cambridge, Oxford, and Bath. She lives in New York State.

Has the fresh charm of treating human
evolution as a curious story that leads to
the Neanderthals, rather than as a moral
tale that rises ever upward and inevitably
to us godlike moderns.
— Harper’s