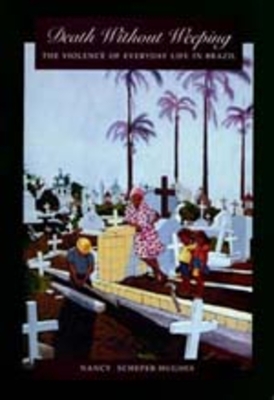 By Nancy Scheper-Hughes
Email or call for price

When lives are dominated by hunger, what becomes of love? When assaulted by daily acts of violence and untimely death, what happens to trust? Set in the lands of Northeast Brazil, this is an account of the everyday experience of scarcity, sickness and death that centres on the lives of the women and children of a hillside "favela". Bringing her readers to the impoverished slopes above the modern plantation town of Bom Jesus de Mata, where she has worked on and off for 25 years, Nancy Scheper-Hughes follows three generations of shantytown women as they struggle to survive through hard work, cunning and triage. It is a story of class relations told at the most basic level of bodies, emotions, desires and needs. Most disturbing - and controversial - is her finding that mother love, as conventionally understood, is something of a bourgeois myth, a luxury for those who can reasonably expect, as these women cannot, that their infants will live.

Nancy Scheper-Hughes is Professor of Anthropology at the University of California, Berkeley. Her book Saints, Scholars, and Schizophrenics: Mental Illness in Rural Ireland (UC Press) received the Margaret Mead Award in 1981. She is the winner of the 2000 J. I. Stanley Prize of the School of American Research.

"Makes a case for ethnography as an art form. . . . A compelling, if deeply disturbing, account of women in a Brazilian shantytown."
— New York Times

"Simply breathtaking. Its controversial theme—that mother love as conventionally understood is a luxury for those who can reasonably expect, as poor women in Brazil cannot, that their infants will live—is, in the best sense, illuminated by deconstructionist and feminist thought. The author's understanding of these lives on the edge is at times sympathetic, passionate, and sophisticated. But what makes the book as exciting to read as a good novel is her long-term interaction with a group of people that she clearly loves and the complete lack of the sense of the "other" that is so often found in anthropological writing. This work should have as much influence on studies of the relationship of women and children as did Margaret Mead's Growing Up in Samoa (1936) on the shaping of adolescence or Oscar Lewis's The Children of Sanchez (1961) on the cultural effects of poverty. Highly recommended."
— Library Journal

"The compelling narrative investigates the everyday tactics of survival that people use to stay alive in a culture of institutionalized dependency ravaged by sickness, scarcity, feudal working conditions and death-squad "disappearances."
— Publishers Weekly

"A shattering portrayal of life among the impoverished inhabitants of Alto do Cruzeiro ('Hill of the Crucifixion'), a shantytown in the city of Bom Jesus da Mata in northeastern Brazil's Pernambuco Province. . . . A stimulating, consistently engrossing contribution to the scientific understanding of a complex and tragic situation."
— Kirkus Reviews