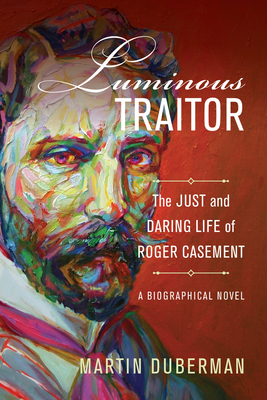 By Martin Duberman
$32.95
Not Available In-Store - Usually Ships from Warehouse in 1-5 Days

Roger Casement was an internationally renowned figure at the beginning of the 20th century, famous for exposing the widespread atrocities against the indigenous people in King Leopold's Congo and his subsequent exposure—for which he was knighted in 1911—of the brutal conditions of enslaved labor in Peru. An Irish nationalist of profound conviction, he attempted, at the outbreak of World War I, to obtain German support and weapons for an armed rebellion against British rule. Apprehended and convicted of treason in a notorious trial that captured worldwide attention, Casement was sentenced to die on the gallows. A powerful petition drive for the commutation of his sentence was inaugurated by George Bernard Shaw and a host of other influential figures.

A gay man, Casement kept detailed diaries of his sexual escapades, and the British government, upon discovering the diaries, circulated its pages to public figures, thereby crippling what had been a mounting petition for clemency. In 1916, he was hanged. In this gripping reimagining, acclaimed historian Martin Duberman paints a full portrait of the man for the first time. Tracing his evolution from servant of the empire to his work as a humanitarian activist and anti-imperialist, Duberman resurrects and recognizes all facets—from the professional to the personal—of the fantastic life of this pioneer for human rights.

Martin Duberman is Distinguished Professor of History Emeritus at City University of New York, where he founded and directed the Center for Lesbian and Gay Studies. He is the author of numerous histories, biographies, memoirs, essays, plays, and novels including Has the Gay Movement Failed?, Cures: A Gay Man’s Odyssey, Paul Robeson, Stonewall, Black Mountain: An Exploration in Community, The Worlds of Lincoln Kirstein, and more than a dozen others. He is the recipient of the Bancroft Prize, multiple Lambda Literary Awards, and the Lifetime Achievement Award from the American Historical Association, and he has been a finalist for the Pulitzer Prize and the National Book Award. In 2012 Duberman received an honorary Doctor of Humane Letters from Amherst College and in 2017 an honorary Doctor of Letters from Columbia University.

"Duberman calls his book a biographical novel, though it is more biography of the real-life Casement than novel. But, in either case, it is a painstaking, sympathetic portrait of a celebrated humanitarian. The result is both a political history and also an examination of the history of homosexuality. It is valuable on both counts."
— Booklist

"...a deeply informed biographical novel, skillfully told in present tense, that brings [a] lesser-known historical era and its principal actors to light."
— The Bay Area Reporter

"A biographical novel about a complex man in complex times, but someone who burnt with a sense of justice, and when he wasn’t pursuing that (in the Congo or Peru or Ireland) was burning with forbidden sexual desire for men wherever he could find them. We hanged him."
— Stephen Hough

“In the last year alone, renowned gay historian Martin Duberman, Ph.D. ’57, has published a memoir, a polemic about gay activism, and a “novel/history” about the inner circle of Kaiser Wilhelm. He adopts the third genre for Luminous Traitor: The Just and Daring Life of Roger Casement, A Biographical Novel: cleaving to the historical record and using “informed speculation” to fill in the gaps.”
— Harvard Magazine
My Account • Sign In • Sign Out • Register
NEW & USED BOOKS
AUTHOR EVENTS • GIFTS
Tempe
6428 South McClintock Drive
480.730.0205
[Google Map]
10am-7pm daily
Trade Counter 11am-6pm daily