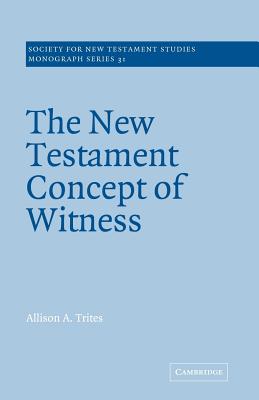 By Alison A. Trites
$55.99
Not Available In-Store - Usually Ships from Warehouse in 1-5 Days

Terms like 'witness' and 'testimony' occur frequently in religious contexts and have special significance there, culminating in the development of the Greek martus (witness) into the English 'martyr'. They also have a legal context, and Professor Trites examines their use in the New Testament in the light of ancient legal practice. The author argues that the idea of witness is a live metaphor in the New Testament, to be understood in terms of the Old Testament legal assembly, though the Greek lawcourts are also relevant. The witness theme is developed in a sustained way in John, Acts and Revelation, and is also used in the Synoptic Gospels, the Pastoral and General Epistles, and Hebrews. In contexts of persecution and suffering the forensic metaphors tend to be identified with military ones, but in principle they are quite distinct. Professor Trites contends that the idea of witness in relation to Christ and his gospel plays an essential part in the New Testament and in Christian faith and life generally.
My Account • Sign In • Sign Out • Register
NEW & USED BOOKS
AUTHOR EVENTS • GIFTS
Tempe
6428 South McClintock Drive
480.730.0205
[Google Map]
10am-7pm daily
Trade Counter 11am-6pm daily