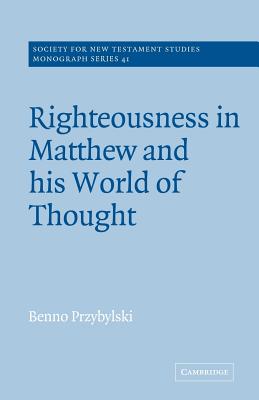 By Benno Przybylski
$40.99
Not Available In-Store - Usually Ships from Warehouse in 1-5 Days

While New Testament scholars generally agree that the concept of righteousness occupies an important place in the Gospel of Matthew, there is no scholarly consensus as to the meaning and function of this concept. The author of this study contends that this lack of agreement is largely due to the fact that the wrong background literature (i.e. the Old Testament and the letters of Paul) has been posited as governing Matthaean usage. It is only when Matthaean usage is viewed in terms of the world of thought reflected in the Dead Sea Scrolls and the Tannaitic literature that it becomes intelligible. This monograph makes a twofold scholarly contribution. Professor Przybylski's exhaustive analysis of the righteousness terminology in the background literature provides a foundation for research in various areas of early Christianity and Judaism. In addition, his study contributes to a better understanding of the Matthaean view of salvation. This latest title in a distinguished series will arouse interest not only among New Testament specialists but also among those concerned with Judaic studies of the period.
My Account • Sign In • Sign Out • Register
NEW & USED BOOKS
AUTHOR EVENTS • GIFTS
Tempe
6428 South McClintock Drive
480.730.0205
[Google Map]
10am-7pm daily
Trade Counter 11am-6pm daily