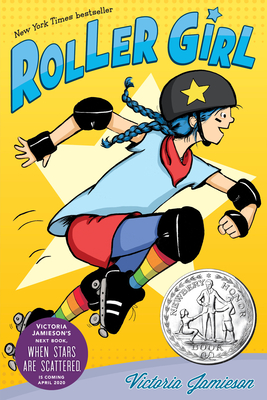 As a former derby girl myself I am always excited when roller derby is the subject of a book. This lovely graphic novel is a fun and fantastic (and realistic) look at the sport and the positive effect it can have. I highly recommend this book (and roller derby) to girls of all ages.

I played roller derby for 4 years (Hi Hellbent Heather here) & I loved this book because it was true to the experience of just starting out. Astrid discovers roller derby at the time when she & her childhood best friend are drifting apart. The story shows that you have to put in the work & practice if you want to play roller derby. Astrid falls a lot, get bruises but she doesn't quit. She finds friendship within her teammates & her "warface." This is a great book for any young girl who is curious about roller derby or any roller derby player out, current or retired, as a look into the life of a roller derby player.

The Newbery Honor Award Winner and New York Times bestseller Roller Girl is a heartwarming graphic novel about friendship and surviving junior high through the power of roller derby—perfect for fans of Raina Telgemeier's Smile!

For most of her twelve years, Astrid has done everything with her best friend Nicole. But after Astrid falls in love with roller derby and signs up for derby camp, Nicole decides to go to dance camp instead. And so begins the most difficult summer of Astrid's life as she struggles to keep up with the older girls at camp, hang on to the friend she feels slipping away, and cautiously embark on a new friendship. As the end of summer nears and her first roller derby bout (and junior high!) draws closer, Astrid realizes that maybe she is strong enough to handle the bout, a lost friendship, and middle school… in short, strong enough to be a roller girl.

Victoria Jamieson received her BFA in Illustration from the Rhode Island School of Design. She worked as a children’s book designer before moving to Portland and becoming a freelance illustrator. She has also worked as a portrait artist aboard a cruise ship, and has lived in Australia, Italy, and Canada. She maintains a not-so-secret identity as Winnie the Pow, skater with the Rose City Rollers roller derby league.

* "Jamieson captures this snapshot of preteen angst with a keenly decisive eye, brilliantly juxtaposing the nuances of roller derby with the twists and turns of adolescent girls' friendships...Full of charm and moxie—don't let this one roll past." —Kiruks, starred review

* "Readers will stand up and cheer."—Publishers Weekly, starred review


"Visually, Roller Girl is very appealing — think Lynn Johnston with a modern edge — but it's the storytelling that really sets this graphic novel apart…A great choice for tween girls, whether they're remaking themselves, renegotiating friendships or just weathering the stormy seas of early adolescence." —Chicago Tribune