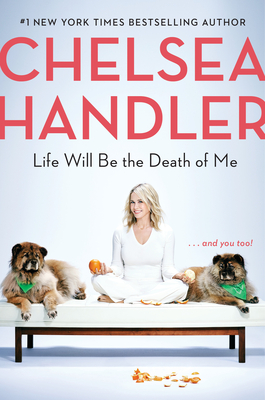 By Chelsea Handler
$27.00
Email or call for price.

A SKIMM READS PICK • “This will be one of your favorite books of all time.”—Amy Schumer

In a haze of vape smoke on a rare windy night in L.A. in the fall of 2016, Chelsea Handler daydreams about what life will be like with a woman in the White House. And then Donald Trump happens. In a torpor of despair, she decides that she’s had enough of the privileged bubble she’s lived in—a bubble within a bubble—and that it’s time to make some changes, both in her personal life and in the world at large.

At home, she embarks on a year of self-sufficiency—learning how to work the remote, how to pick up dog shit, where to find the toaster. She meets her match in an earnest, brainy psychiatrist and enters into therapy, prepared to do the heavy lifting required to look within and make sense of a childhood marked by love and loss and to figure out why people are afraid of her. She becomes politically active—finding her voice as an advocate for change, having difficult conversations, and energizing her base. In the process, she develops a healthy fixation on Special Counsel Robert Mueller and, through unflinching self-reflection and psychological excavation, unearths some glittering truths that light up the road ahead.

Thrillingly honest, insightful, and deeply, darkly funny, Chelsea Handler’s memoir keeps readers laughing, even as it inspires us to look within and ask ourselves what really matters in our own lives.

Praise for Life Will Be the Death of Me

“You thought you knew Chelsea Handler—and she thought she knew herself—but in her new book, she discovers that true progress lies in the direction we haven’t been.”—Gloria Steinem

“I always wondered what it would be like to watch Chelsea Handler in session with her therapist. Now I know.”—Ellen DeGeneres

“I love this book not just because it made me laugh or because I learned that I feel the same way about certain people in politics as Chelsea does. I love this book because I feel like I finally really got to know Chelsea Handler after all these years. Thank you for sharing, Chelsea!”—Tiffany Haddish

Chelsea Handler is a writer, comedian, producer, TV host, activist, and the author of five consecutive New York Times bestsellers. She hosted the late-night talk show Chelsea Lately on the E! network from 2007 to 2014 and released a documentary series, Chelsea Does, on Netflix in January 2016. In 2016 and 2017, Handler hosted the talk show Chelsea on Netflix. She is at work on a documentary about white privilege that will be released by Netflix in 2019.

“This will be one of your favorite books of all time. Through her intensely vulnerable, honest, and hilarious reflections Chelsea shows us more than just her insides. She shows us ourselves.”—Amy Schumer

“The Chelsea Handler I know is a take-no-prisoners activist for the causes she believes in. She brings the same fearlessness and commitment to telling her truth in this book. I’m hoping that one day, in exchange for this blurb, she will let me see the security camera footage of the dog fight in her bedroom.”—Trevor Noah

“This is, of course, a roller coaster ride, since it’s a Chelsea Handler book, but it’s a thoughtful roller coaster ride, including not only dog poop and hallucinogenics, but a tour-de-force loop-the-loop through formative trauma and questions of how to be a grown-up and what it means to go deeper into your own life, and I’m sure I mentioned funny bits.”—Rebecca Solnit, author of Men Explain Things to Me

“In this brutally truthful memoir, Chelsea Handler introduces us to the family, struggles, and triumphs that have shaped her life. Her story is both personal and highly relatable, especially for anyone who has ever wondered why we’re on this earth and what we can do to change it for the better. This book is hilarious and heartbreaking; I could not put it down. Chelsea is the girlfriend you want to share your stories with and the woman you want with you on the front lines.”—Cecile Richards, former president of Planned Parenthood and author of Make Trouble

“I don’t know of any other writer who could move from Robert Mueller to edibles to rescue dogs in a way that makes you laugh, cry, and ponder the meaning of life. Chelsea Handler’s political awakening in the Trump Era serves as the hilariously insightful backdrop for Life With Be The Death of Me, a book in which she chronicles her own journey and our collective insanity with just the right mix of sincerity and snark.”—Jon Favreau, co-host of Pod Save America