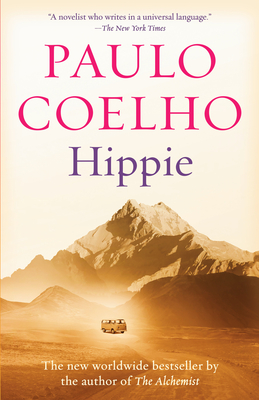 From South America to Holland to Nepal—a new journey in the company of Paulo Coelho, bestselling author of The Alchemist.

Drawing on the rich experience of his own life, bestselling author Paulo Coelho takes us back in time to relive the dreams of a generation that longed for peace. In Hippie, he tells the story of Paulo, a young, skinny Brazilian man with a goatee and long, flowing hair, who dreams of becoming a writer, and Karla, a Dutch woman in her twenties who has been waiting to find a companion to accompany her on the fabled hippie trail to Nepal.

After meeting each other in Amsterdam, she convinces Paulo to join her on a trip aboard the Magic Bus that travels from Amsterdam to Istanbul and across Central Asia to Kathmandu. As they embark on this journey together, Paulo and Karla explore a love affair that awakens them on every level and leads to choices and decisions that will set the course for their lives thereafter.

PAULO COELHO is the author of many international best sellers, including The Alchemist, Eleven Minutes, The Pilgrimage, The Fifth Mountain, and Adultery, among others. He has been a member of the Academy of Letters of Brazil since 2002 and in 2007 was named a Messenger of Peace by the United Nations. In 2003, he received the Guinness World Record for most translations of a single title (The Alchemist) signed by the author in one sitting and several years later, in 2009, he received a new Guinness World Record for most translated author for the same book (also for The Alchemist).

Paulo Coelho’s books have been translated into 88 languages and have sold more than 320 million copies in more than 170 countries. His novel, The Alchemist, one of the most influential books of all time, has sold more than 85 million copies and has been cited as an inspiration by people as diverse as Malala Yousafzai and Pharrell Williams. He has received numerous prestigious international awards, including the Hans Christian Andersen Award and the Chevalier de l’Ordre National de la Légion d’Honneur, to name a few.

“A novelist who writes in a universal language.” –The New York Times

“The journey of a lifetime. . . . Coelho helps us understand a generation.” –Free Press Journal

“A celebration of the spiritual longing that inspired a generation to abandon norms and pursue an unconventional path to the truth, this metafiction by the revered Coelho lyrically fuses the lines between authenticity and illusion, art and fact.” –Booklist

“Woven with self-discovery and punctuated by. . . unique wisdom. . . The focal point of Hippie is human connection – what happens when we ‘allow two souls the time to get to know each other.’” – Bookreporter

“Divine surprise. . . Paulo Coelho's most autobiographical story, is an interesting documentary about the hippie generation of the 70's.” – L’Express

“Paulo Coelho is undoubtedly an alchemist. He turns everything into gold."  –La Vanguardia