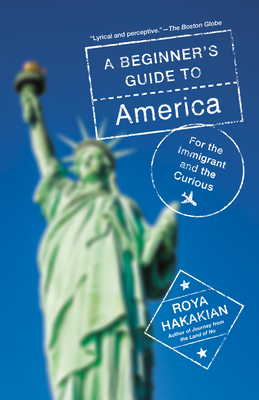 A stirring, witty, and poignant glimpse into the bewildering American immigrant experience from someone who has lived it. Hakakian's "love letter to the nation that took her in [is also] a timely reminder of what millions of human beings endure when they uproot their lives to become Americans by choice" (The Boston Globe).

Into the maelstrom of unprecedented contemporary debates about immigrants in the United States, this perfectly timed book gives us a portrait of what the new immigrant experience in America is really like.

Written as a "guide" for the newly arrived, and providing "practical information and advice," Roya Hakakian, an immigrant herself, reveals what those who settle here love about the country, what they miss about their homes, the cruelty of some Americans, and the unceasing generosity of others. She captures the texture of life in a new place in all its complexity, laying bare both its beauty and its darkness as she discusses race, sex, love, death, consumerism, and what it is like to be from a country that is in America's crosshairs.

Her tenderly perceptive and surprisingly humorous account invites us to see ourselves as we appear to others, making it possible for us to rediscover our many American gifts through the perspective of the outsider. In shattering myths and embracing painful contradictions that are unique to this place, A Beginner's Guide to America is Hakakian's candid love letter to America.

ROYA HAKAKIAN is the author of Assassins of the Turquoise Palace and Journey from the Land of No, and has published two collections of poetry in Persian. Her essays have appeared in The New York Times and The Wall Street Journal, and on NPR's All Things Considered. She has collaborated on programming for leading journalism units in network television, including 60 Minutes. She is the recipient of a Guggenheim Fellowship, and served on the editorial board of World Affairs. Since 2015, she has taught at THREAD, a writing workshop at Yale, and is a fellow at the Davenport College at Yale. She lives in Connecticut.

“As witty as it is insightful, Roya Hakakian's A Beginner's Guide to America should be required reading for new and old Americans alike. She looks at our familiar culture with a clear eye, alive to our foibles, but inspiringly alive, too, to the ideals and values that have drawn so many to these shores -- a vital reminder, in these uncertain times.”
—Clare Messud, author of Kant's Little Prussian Head and Other Reasons Why I Write

“Hakakian’s book is meant for every­one: for those who scaled moun­tains and wad­ed through rivers to reach our shores; those who com­fort­ably stepped off a boat or plane; those learn­ing Eng­lish for the very first time; those who have lived here for decades; and those Amer­i­can cit­i­zens whose lin­eage dates back to the Mayflower. Hakakian cap­tures the shock, con­fu­sion, awe, humor, and joy a new-to-Amer­i­ca émi­gré expe­ri­ences while also ana­lyz­ing both the mul­ti­plic­i­ty and sin­gu­lar­i­ty of our coun­try. . . . Hakakian has made a major con­tri­bu­tion to the great canon of lit­er­a­ture that encour­ages all Amer­i­cans to bet­ter know them­selves. And, by read­ing her book, one cer­tain­ly will.”
–Jewish Book Council

“[Hakakian is] the most eloquent interpreter of ‘the immigrant’ writing today.”
—Lesley Stahl, correspondent for CBS News’ 60 Minutes

“A Beginner’s Guide to America is a striking and beautiful work: both a genuinely practical primer for newcomers to America, and a deeply personal account of Arrival—an event that underlies nearly every American life. Roya Hakakian provides a timely, entertaining, historically rich reminder of the hope and opportunity this country has offered to so many, for so long, and the rewards it has reaped in return.”
—Jennifer Egan, author of Manhattan Beach

“[Her] observation takes the seemingly banal into the realm of the profound and is characteristic of Hakakian’s honest and beautiful book. . . Hers is a “guide,” yes, but of an amicable kind. She offers counsel to readers, not commandments, and although her book could be seen as a love letter to America, it is one that’s been written by an exacting lover who isn’t blind to this country’s flaws.”
—Tunku Varadarajan, The Wall Street Journal

"Lyrical and perceptive, A Beginner’s Guide to America is an immigrant’s love letter to the nation that took her in. And it is a timely reminder of what millions of human beings endure when they uproot their lives to become Americans by choice."
—Jeff Jacoby, The Boston Globe

"This touching account by an Iranian-born poet details her adopted home’s quirks: money that all looks the same, well-stocked markets where the fruit has no smell."
—New York Times Book Review

“[Roya Hakakian] tells her story with the soul of a poet.”
–Jewish Book Council

“Roya Hakakian’s book A Beginner’s Guide to America [is] a Tocquevillian gem of sociological and psychological analysis that explains, to a mainly American readership, just how strange this country can be to a newcomer, even — or especially — in what seem like the most banal aspects of life.”
–Bret Stephens, The New York Times

“Poignant and richly observed . . . [Hakakian] captures the immigrant’s twinned sense of hope and loss with lyrical precision. Readers will salute this astute and sincere look at what it means to 'be remade' on American soil.”
—Publishers Weekly

“Pleasingly intimate . . . An enlightening reminder about human rights and civic responsibility, all too relevant in a troubled time.”
—Kirkus Reviews

“Although narrated as advice for incoming immigrants, this personal, yet practical account is intended to challenge misconceptions and biases that native-born U.S. citizens have toward documented and undocumented immigrants. It is highly recommended for all.”
—Library Journal

“Through the use of the second person and a ‘guidebook’ structure, Hakakian’s writing possesses a lyrical quality as she describes quotidian details of life, from arriving in the U.S. on to shopping, then sex and romance.”
—The National Book Review

“A Beginner’s Guide to America shines many lights on this country’s idiosyncrasies . . . but Hakakian strikes a critical balance between admiration and criticism, achieving a love letter to America that nevertheless isn’t blind to the country’s imperfections.”
—Tabby Refael, Jewish Journal

"The book attempts to do the same for everyone born American—to tip our understanding of this country and knock us just a little bit off balance."
—Kathy Leonard Czepiel, The Daily Nutmeg

“Roya Hakakian brings a fresh, provocative and poignant voice to the immigrant experience in America. Part memoir, part reportage and part work of imagination…her guide is both the story of her own life and an attempt at universalizing the experience of coming to America… Her lyrical and authentic voice veers from tongue-in-cheek to bitter, sad to furious, stirring to brokenhearted as she moves from discussions of human rights to civic responsibility, lessons on shopping to discussions about relationships, including a section on the ‘vices and virtues of American lovers.’”
—Rahel Musleah, Hadassah Magazine

“Roya Hakakian is one of the most gifted and evocative writers of our day—her words are magic—and A Beginner’s Guide to America is a tour de force. Brilliant and sweeping, full of crackling insights on every page, this book is delightful, witty, transporting, and deeply inspiring—just what America needs.”
—Amy Chua, author of Battle Hymn of the Tiger Mother

“A Beginner’s Guide to America is a timely, compelling examination of what life in the U.S. looks like for immigrants from the moment they land here and begin adjusting to a new culture.  Highly recommended for immigrants, their friends, and all those who work with the newly arrived.”
—Abdi Nor Iftin, author of Call Me American

"Hakakian’s book is a stirring, insightful, funny and uplifting book. Her real predecessor is Alexis de Tocqueville. A Beginner's Guide to America is a worthy successor to his classic work. Hakakian captures the balance of love for America's ideals, and honest perception of its imperfect achievement of them, that together with the resolve always to do better than we are doing now, is the heart of any honorable American patriotism. Count me among those thrilled to hear the vital message of this intelligent and graceful book.”
—Anthony Kronman, author of The Assault on American Excellence