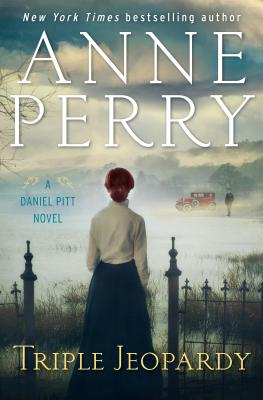 By Anne Perry
$28.00
Not Available In-Store - Usually Ships from Warehouse in 1-5 Days

This is book number 2 in the Daniel Pitt series.

Young lawyer Daniel Pitt must defend a British diplomat accused of a theft that may cover up a deadly crime in this riveting novel from the New York Times bestselling author of Twenty-one Days.

Daniel Pitt, along with his parents, Charlotte and Thomas, is delighted that his sister, Jemima, and her family have returned to London from the States for a visit. But the Pitts soon learn of a harrowing incident: In Washington, D.C., one of Jemima’s good friends has been assaulted and her treasured necklace stolen. The perpetrator appears to be a man named Philip Sidney, a British diplomat stationed in America’s capital who, in a cowardly move, has fled to London, claiming diplomatic immunity. But that claim doesn’t cover his other crimes. . . .

When Sidney winds up in court on a separate charge of embezzlement, it falls to Daniel to defend him. Daniel plans to provide only a competent enough defense to avoid a mistrial, allowing the prosecution to put his client away. But when word travels across the pond that an employee of the British embassy in Washington has been found dead, Daniel grows suspicious about Sidney’s alleged crimes and puts on his detective hat to search for evidence in what has blown up into an international affair.

As the embezzlement scandal heats up, Daniel takes his questions to intrepid scientist Miriam fford Croft, who brilliantly uses the most up-to-date technologies to follow an entirely new path of investigation. Daniel and Miriam travel to the Channel Islands to chase a fresh lead, and what began with a stolen necklace turns out to have implications in three far greater crimes—a triple jeopardy, including possible murder.

“Another deftly crafted and original mystery by a true master of the genre . . . is ideal reading for all dedicated mystery buffs.”—Midwest Book Review

Anne Perry is the New York Times bestselling author of two acclaimed series set in Victorian England: the William Monk novels, including Dark Tide Rising and An Echo of Murder, and the Charlotte and Thomas Pitt novels, including Murder on the Serpentine and Treachery at Lancaster Gate. She is also the author of a new series featuring Thomas and Charlotte Pitt’s son, Daniel, including Triple Jeopardy and Twenty-one Days, as well as five World War I novels, sixteen holiday novels, most recently A Christmas Revelation, and a historical novel, The Sheen on the Silk, set in the Ottoman Empire. Anne Perry lives in Los Angeles.

“Readers may find themselves smitten with Daniel [Pitt] and with the dauntless Miriam fforde Croft, whose relationship with Daniel deepens in this episode. . . . Primarily identified for her authentic period sets and well-rendered characters, [Anne] Perry writes in what she has called the ‘Put Your Heart on the Page’ method, with the focus placed squarely on what happens to people under the pressure of investigation. This book is an excellent example of her craft.”—Booklist

“Veteran Perry dials back the period detail and the updates on the lives of the continuing characters to focus on one of her most teasing mysteries, this time with a courtroom finale that may be her strongest ever.”—Kirkus Reviews

“Set ten years after Murder on the Serpentine, [Anne] Perry’s excellent new series launch expertly takes the Pitts into a new century and makes use of the scientific advancements of the time, fingerprints and X-rays, to add fresh drama to the courtroom scenes. . . . Fans of Perry’s long-running [Charlotte and] Thomas Pitt series will delight in following the adventures of a new generation.”—Library Journal (starred review)

“Readers will quickly fall in love with [Daniel] Pitt, following along as he investigates a gruesome murder and chuckling as he throws those involved off kilter. Perry is a master at bringing setting to life, and readers will be taken in by the time and place as they get to know Daniel Pitt and those close to him in this engaging novel.”—RT Book Reviews

“The maven of well-crafted Victorian mysteries and author of both the William Monk series and the Charlotte and Thomas Pitt mysteries introduces the Pitts’ son, Daniel, junior barrister, in this first of what proves to be an intriguing, entertaining, and character-centric new series. . . . In a story that’s nicely tied to the characters in the Pitt series, Perry introduces Daniel and his cohort, the brilliant Miriam fford Croft, and raises the knotty question of whether some clients are truly undefendable.”—Booklist

“[Perry] seems just as comfortable in 1910 as she ever did back in Victoria’s day.”—Kirkus Reviews

Praise for Murder on the Serpentine, the final Charlotte and Thomas Pitt novel