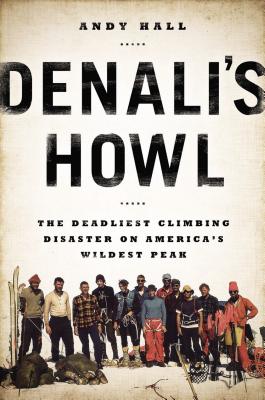 Denali's Howl is the white-knuckle account of one of the most deadly climbing disasters of all time.
In 1967, twelve young men attempted to climb Alaska's Mount McKinley known to the locals as Denali one of the most popular and deadly mountaineering destinations in the world. Only five survived.
Journalist Andy Hall, son of the park superintendent at the time, investigates the tragedy. He spent years tracking down survivors, lost documents, and recordings of radio communications. In Denali's Howl, Hall reveals the full story of an expedition facing conditions conclusively established here for the first time: At an elevation of nearly 20,000 feet, these young men endured an arctic super blizzard, with howling winds of up to 300 miles an hour and wind chill that freezes flesh solid in minutes. All this without the high-tech gear and equipment climbers use today.
As well as the story of the men caught inside the storm, Denali's Howl is the story of those caught outside it trying to save them Hall's father among them. The book gives readers a detailed look at the culture of climbing then and now and raises uncomfortable questions about each player in this tragedy. Was enough done to rescue the climbers, or were their fates sealed when they ascended into the path of this unprecedented storm?

ANDY HALL grew up in the shadow of Denali. He is the former editor and publisher of Alaska magazine. He lives in Chugiak, Alaska.

“In this straightforward, balanced account of the greatest mountaineering disaster in Alaskan history, Andy Hall allows the full tragedy of that episode to emerge. In resisting the facile urge to lay blame, his narrative captures with gripping immediacy the intersection of seemingly small human decisions with one of the most powerful storms ever to descend on Denali. As one who was climbing elsewhere in the Alaska Range at the time, I had long pondered just how the catastrophe came to pass. Thanks to Hall, I understand it better than ever before.”
—David Roberts, author of The Mountain of My Fear and Alone on the Ice

“A haunting, meticulously-researched account of twelve men’s encounter with the awesome fury of nature.”
—Amanda Padoan, author of Buried in the Sky: The Extraordinary Story of the Sherpa Climbers on K’s Deadliest Day

“Twelve men went up the slopes of North America's highest mountain in the summer of 1967.  Only five made it back.  The ill-fated Wilcox expedition to Denali finds an able chronicler in Andy Hall's gripping account of mountain majesty, mountain gloom, and human doom.”
—Maurice Isserman, co-author of Fallen Giants:  Himalayan Mountaineering from the Age of Empire to the Age of Extremes

“One of those couldn’t-put-it-down books!  This harrowing story of a more than 40-year-old mountaineering tragedy is raw and immediate as it marches relentlessly towards the final, devastating end.”
—Bernadette McDonald, author of Freedom Climbers