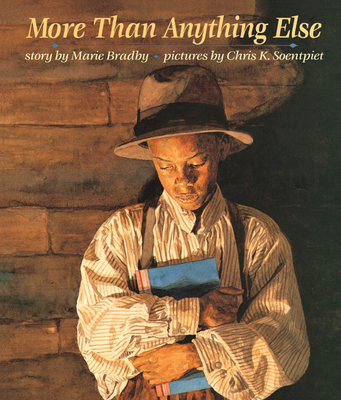 "A fictionalized story about the life of young Booker T. Washington. Living in a West Virginia settlement after emancipation, nine-year-old Booker travels by lantern light to the salt works, where he labors from dawn till dusk. Although his stomach rumbles, his real hunger is his intense desire to learn to read.... [A] moving and inspirational story." - School Library Journal, starred review

Chris Soentpiet (pronounced: soon-peet) is an award winning illustrator and author. Aside from writing and illustrating, Chris travels all around the world promoting the love of children's literature, the arts, and multi-culturalism.

When Chris was eight years of age, an American family adopted him from Korea. His talent for watercolors has won him an art scholarship to attend the prestigious Pratt Institute in New York City. After graduating with honors, he wrote and illustrated his first picture book, Around Town. His books have won praise from many critics such as Parent's Choice, American Bookseller, Junior Library Guild, New York Times, and American Library Association.

Award-winning author Marie Bradby switched from a career as a full-time journalist to writing for children after the birth of her son seventeen years ago. Even though her days as a journalist are behind her, she uses her sharp investigative skills as she interviews people and researches archives to fill in crucial details and bring her characters to life in her historical fiction. She has given presentations at schools, writing workshops and literature conferences all over the country. She has been a staff writer for National Geographic Magazine; and for the Providence Journal, the Lexington Herald, and the Courier-Journal newspapers.

Awards:Momma Where Are You From? (2000)2000 GOLDEN KITE AWARD FOR PICTURE BOOK TEXT-HONOR BOOK