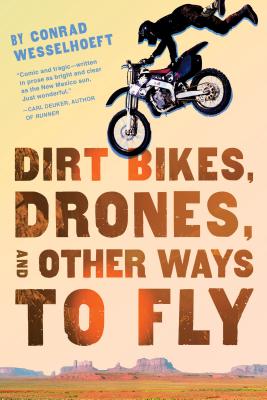 By Conrad Wesselhoeft
Email or call for price
Out of Print

Seventeen year-old dirt-bike-riding daredevil Arlo Santiago catches the eye of the U.S. military with his first-place ranking on a video game featuring drone warfare, and must reconcile the work they want him to do with the emotional scars he has suffered following a violent death in his family. Adios, Nirvana author Conrad Wesselhoeft, takes readers from the skies over war-torn Pakistan to the dusty arroyos of New Mexico's outback in this young adult novel about daring to live in the wake of unbearable loss.

"Features both a supporting cast lit up with larger-than-life characters and a protagonist who loves flying recklessly close to the edge but makes right choices in the clutch."
—Booklist