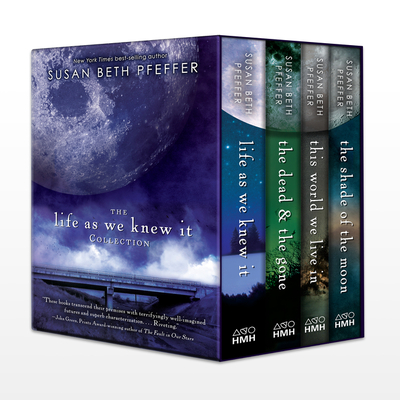 "These books transcend their premises with terrifyingly well-imagined futures and superb characterization. Riveting." —John Green, author of The Fault in Our Stars

When a meteor hits the moon, teenage Miranda and her friends and family struggle to survive the unimaginable. Four gripping books that follow their ordeal are collected in this boxed set.

Susan Beth Pfeffer is the author of many books for teens, including the New York Times best-selling novel Life As We Knew It, which was nominated for several state awards, and its companion books, The Dead and the Gone, This World We Live In, and The Shade of the Moon. She lives in Middletown, New York.

Praise for LIFE AS WE KNEW IT   An ALA Best Book for Young Adults  A 2011 ALA Popular Paperbacks Title  A CCBC Choice  A Junior Library Guild Premier Selection  A Listening Library Selection  An Amazon.com Best Book of the Year     * "Absorbing from first page to last." —Publishers Weekly, starred review   "Riveting and deeply frightening." —Bulletin   "You will read it in one sitting, fighting back tears as you bite your nails." —Teenreads.com     Praise for THE DEAD AND THE GONE   * "As riveting as Life as We Knew It and even grittier. . . . The powerful images and wrenching tragedies will haunt readers." —Publishers Weekly, starred review   * "Everything Pfeffer writes about seems wrenchingly plausible." —Booklist, starred review   "Incredibly engaging." —Kirkus Reviews     Praise for THIS WORLD WE LIVE IN   * "The protagonists of Pfeffer's novels The Dead and the Gone and Life As We Knew It join forces in this third installment of a harrowing saga set in the not so distant future. . . . Throughout, readers will be moved by displays of compassion, strength, and faith as characters endure grim realities and face an uncertain future." —Publishers Weekly, starred review   "Palpable despair is dappled with tiny flares of hope in this third entry in Pfeffer’s enthralling series. . . . Fans of the first two will thrill to this latest and the loose ending will leave them hoping for more." —Kirkus Reviews     Praise for THE SHADE OF THE MOON   "Action-packed and completely unpredictable, this latest will be widely anticipated by the series' many fans." —Kirkus Reviews   "Pfeffer's well-written take on what life might be as it returns to 'normal' is sometimes brutal and always depressingly real." —Booklist —