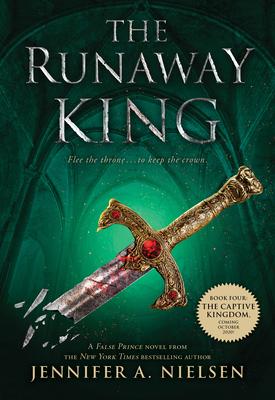 By Jennifer A. Nielsen
Email or call for price
Hard to Find

This is book number 2 in the The Ascendance Series series.

“Jaron is off and running again in the second volume of The Ascendance Trilogy, this time not as a false prince but as the newly anointed King of Carthya. And he's running for his life! With few friends and plenty of people, including pirates, who would rather see him dead, Jaron decides to run straight toward the trouble that lays in wait for him. Who can he trust? Who will become his ally? Nielsen once again keeps up a breakneck pace in this very satisfying fantasy.”
— Anne Holman, The King's English, Salt Lake City, UT

A kingdom teetering on the brink of destruction. A king gone missing. Who will survive? Find out in the thrilling sequel to Jennifer A. Nielsen's New York Times bestselling blockbuster The False Prince!
Just weeks after Jaron has taken the throne, an assassination attempt forces him into a deadly situation. Rumors of a coming war are winding their way between the castle walls, and Jaron feels the pressure quietly mounting within Carthya. Soon, it becomes clear that deserting the kingdom may be his only hope of saving it. But the further Jaron is forced to run from his identity, the more he wonders if it is possible to go too far. Will he ever be able to return home again? Or will he have to sacrifice his own life in order to save his kingdom?

The stunning second installment of The Ascendance Series takes readers on a roller-coaster ride of treason and murder, thrills and peril, as they journey with the Runaway King!

And don't miss the highly anticipated fourth book in the series, The Captive Kingdom, coming October 2020!

Praise for The False Prince:

"Sage proves to be a compelling character whose sharp mind and shrewd self-possession will make readers eager to follow him into a sequel." -- Wall Street Journal

Praise for The Runaway King:

"A fast-paced and thrilling read with twists and turns that never let up." -- School Library Journal

"As jammed with action and violent swordplay as its predecessor." -- Booklist