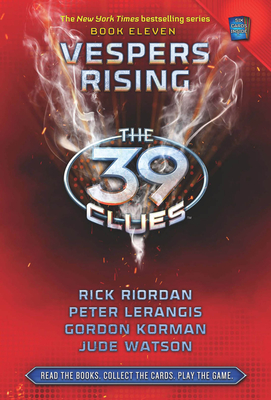 This is book number 11 in the The 39 Clues series.

The Cahills aren't the only family searching for the Clues. . . .The Cahills thought they were the most powerful family the world had ever known. They thought they were the only ones who knew about Gideon Cahill and his Clues. The Cahills were wrong. Powerful enemies -the Vespers- have been waiting in the shadows. Now it's their time to rise and the world will never be the same. In Vespers Rising, a brand new 39 Clues novel, bestselling authors Rick Riordan, Peter Lerangis, Gordon Korman and Jude Watson take on the hidden history of the Cahills and the Vespers, and the last, terrible legacy Grace Cahill leaves for Amy and Dan.

Peter Lerangis is the author of The Sword Thief and The Viper's Nest, Books 3 and 7 in the bestselling multi-media adventure series The 39 Clues. He has written more than 150 books for young readers in many different genres. He's also a Broadway musical theater actor/singer, a marathon runner, and a father of two sons. He currently lives in New York City.
Rick Riordan is the #1 New York Times bestselling author of the Percy Jackson and the Olympians series for children and the Tres Navarre series for adults. His books have won many accolades including a mention on the 2005 New York Times Notable list for The Lightning Thief. Rick lives with his family in San Antonio, Texas.
Gordon Korman is the beloved author of over one hundred novels for young readers, including hilarious middle-grade classics such as the Macdonald Hall series, I Want to Go Home and Slacker. Born in Montreal, Quebec, Gordon grew up in Thornhill, Ontario, and now lives in New York with his family. Visit him online at www.gordonkorman.com.
Jude Watson is the author of six 39 Clues books, Beyond the Grave, In Too Deep, Vespers Rising, A King's Ransom, Nowhere to Run, and Mission Titanic, along with the bestselling Star Wars: Last of the Jedi and Jedi Quest series. As Judy Blundell, she wrote What I Saw and How I Lied, the 2008 winner of The National Book Award for Young People's Literature. She lives in Long Island, New York, with her husband and daughter.