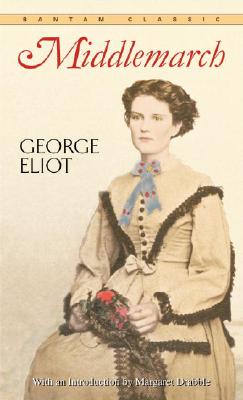 It took me 60+ years of reading to pick up a copy of Middlemarch. I'd read and reread Jane Austen, and thought that Eliot couldn't possibly be as engaging, witty and delightful. In fact, Eliot is to Austin as Barbara Kingsolver is to many contemporary authors who give us good, entertaining books but without the depth that makes Lacuna or Poisonwood Bible a full-bodied experience. How could George Eliot have had such insight, not only into society and relationships, but science, medicine, agriculture and economics? No matter, just read it and enjoy.

Few novelists have ever attempted so broad a canvas as George Eliot in her masterpiece, Middlemarch. Portraying every level of social life in a provincial Midlands town called Middlemarch, she interweaves several intensely dramatic stories of love and death, betrayal and reconciliation, into one of the finest pictures of nineteenth-century England ever created. Its acute psychological penetration also makes it an exceptionally modern work, particularly in the romantic idealism of Dorothea Brooke, who often resembles George Eliot herself, and in the disastrous marriage and thwarted career of the young reformist doctor, Lydgate. Virginia Woolf called it one of the few English novels written for grown-up people and it is truly great literature that ranks among the best novels in the world.

Mary Ann Evans was born on November 22, 1819, at Chilvers Coton, Warwickshire, England, the last child of an estate agent. During her girlhood, she went through a phase of evangelical piety, but her strong interest in philosophy and her friendship with religious freethinkers led to a break with orthodox religion. When one of these friends married in 1843, Mary Ann took over from his wife the task of translating D.F. Strauss s The Life of Jesus Critically Examined (1846), a work that had deep effect on English rationalism. After her father s death she settled in London and from 1851 to 1854 she served as a writer and editor of the Westminster Review, the organ of the Radical party. In London she met she met George Henry Lewes, a journalist and advanced thinker. Lewes was separated from his wife, who had had two sons by another man, but had been unable to obtain a divorce. In a step daring for Victorian times, Mary Ann Evans began living openly with Lewes in 1854, in a union they both considered as sacred as a legal marriage and one that lasted until his death in 1878. With Lewes s encouragement, Mary Ann Evans wrote her first fictional work, The Sad Fortunes of the Reverend Amos Barton, for Blackwood s Magazine in 1857; it was followed by two more stories published under the pseudonym George Elliot George because it was Lewes s name and Eliot because, she said, it was good mouth-filling, easily pronounced word. At the age of thirty-nine she used her memories of Warwickshire to write her first long novel, Adam Bede (1859), a book that established her as the foremost woman novelist in her day. Then came The Mill on the Floss (1860), Silas Marner (1861), and Romola (1863). Her masterpiece and one of the greatest English novels, Middlemarch, was published in 1871-72. Her last work was Daniel Deronda (1876). After Lewes s death George Eliot married John Walter Cross. He was forty; she was sixty-one. Before her death on December 22, 1880, she had been recognized by her contemporaries as the greatest living writer of English fiction."

"No Victorian novel approaches Middlemarch in its width of reference, its intellectual power, or the imperturbable spaciousness of its narrative."—V. S. Pritchett