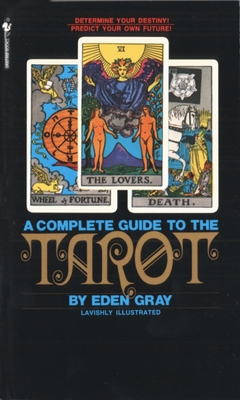 For centuries, the strange and beautiful Tarot cards have been an endless source of fascination. Now one of the foremost authorities in the field reveals the intricacies of this ancient art.

With detailed reproductions and explanations, Eden Gray offers explicit advice about the three different methods of reading the cards and using the Tarot for divination and meditation. Both beginning students and advanced devotees will find in this book insights into the ancient lore of the Tarot.

“The Tarot is a symbolic record of human experience. Through deeply rooted mystic powers, the cards accomplish miracles of psychological insight, wise counsel and accurate divination.”—from A Complete Guide to the Tarot

A former actress who appeared with Katharine Cornell, Frederic March, and Brian Ahern, Eden Gray traveled all over the world. She was a leading woman in a play in London and helped to produce several plays for the London theater.

For ten years, Gray owned a bookstore-publishing house in New York City and published books on metaphysical themes. She gave classes in how to read the Tarot cards in New York and Palm Beach. She also lectured and taught classes in Science of Mind at the First Church of Religious Science in New York, as well as a number of other cities. Her other titles include Tarot Revealed and Mastering the Tarot.