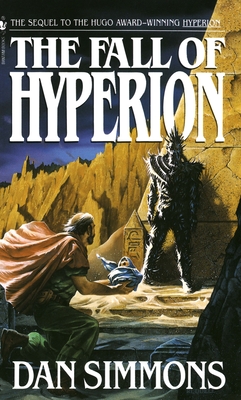 This is book number 2 in the Hyperion Cantos series.

Now, in the stunning continuation of the epic adventure begun in Hyperion, Simmons returns us to a far future resplendent with drama and invention. On the world of Hyperion, the mysterious Time Tombs are opening. And the secrets they contain mean that nothing—nothing anywhere in the universe—will ever be the same.

Praise for The Fall of Hyperion

“One of the finest SF novels published in the past few years.”—Science Fiction Eye

“A magnificently original blend of themes and styles.”—The Denver Post

Dan Simmons, a full-time public school teacher until 1987, is one of the few writers who consistently work across genres, producing novels described as science fiction, horror, fantasy, and mainstream fiction, while winning major awards in all these fields. His first novel, Song of Kali, won the World Fantasy Award; his first science fiction novel, Hyperion, won the Hugo Award. His other novels and short fiction have been honored with numerous awards, including nine Locus Awards, four Bram Stoker Awards, the French Prix Cosmos 2000, the British SF Association Award, and the Theodore Sturgeon Award. In 1995, Wabash College presented Simmons with an honorary doctorate in humane letters for his work in fiction and education. He lives in Colorado along the Front Range of the Rockies.