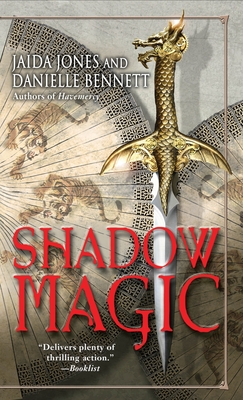 This is book number 2 in the Havemercy series.

Led to victory by its magic-fueled Dragon Corps, Volstov has sent a delegation to its conquered neighbors to work out the long-awaited terms of peace. Among those in the party are the decorated war hero General Alcibiades and the formerly exiled magician Caius Greylace. But even this mismatched pair can’t help but notice that their defeated enemies aren’t being very cooperative. The hidden truth is that the new emperor is harboring a treacherous secret—and once it is revealed, Alcibiades and Caius may be powerless to stop it.

With their only ally an exiled prince now fleeing his brother’s assassins, the countryside rife with terror, and Alcibiades and Caius all but prisoners, it will take the most powerful kind of magic to heal the rift between two strife-worn lands and unite two peoples against a common enemy: shadow magic.

Jaida Jones and Danielle Bennett wrote their first novel together, Havemercy, over the Internet—Jones in New York, Bennett in British Colombia. They now shuttle between apartments in Victoria and Brooklyn, which makes their collaboration much easier. They are also the authors of Dragon Soul.

"An absolute charmer of a book: at once exciting, romantic, and funny."—Peter S. Beagle, author of The Last Unicorn

"These ladies write like a house on fire, delivering fantasy's most pleasant surprise since Temeraire himself took wing in 2006...An impressive debut."—SFReviews.net

“A unique and imaginative blend of epic fantasy, steampunk, humor, and heroism.”—SF Crowsnest.com