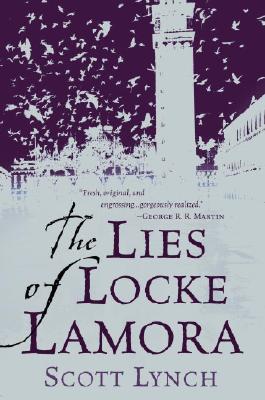 In this stunning debut, author Scott Lynch delivers the wonderfully thrilling tale of an audacious criminal and his band of confidence tricksters. Set in a fantastic city pulsing with the lives of decadent nobles and daring thieves, here is a story of adventure, loyalty, and survival that is one part Robin Hood, one part Ocean’s Eleven, and entirely enthralling.…

An orphan’s life is harsh–and often short–in the island city of Camorr, built on the ruins of a mysterious alien race. But born with a quick wit and a gift for thieving, Locke Lamora has dodged both death and slavery, only to fall into the hands of an eyeless priest known as Chains–a man who is neither blind nor a priest. A con artist of extraordinary talent, Chains passes his skills on to his carefully selected “family” of orphans–a group known as the Gentlemen Bastards. Under his tutelage, Locke grows to lead the Bastards, delightedly pulling off one outrageous confidence game after another. Soon he is infamous as the Thorn of Camorr, and no wealthy noble is safe from his sting.

Passing themselves off as petty thieves, the brilliant Locke and his tightly knit band of light-fingered brothers have fooled even the criminal underworld’s most feared ruler, Capa Barsavi. But there is someone in the shadows more powerful–and more ambitious–than Locke has yet imagined.

Known as the Gray King, he is slowly killing Capa Barsavi’s most trusted men–and using Locke as a pawn in his plot to take control of Camorr’s underworld. With a bloody coup under way threatening to destroy everyone and everything that holds meaning in his mercenary life, Locke vows to beat the Gray King at his own brutal game–or die trying.…

Scott Lynch was born in St. Paul, Minnesota, in 1978 and currently lives in Wisconsin with his fiancee and a small menagerie of household critters. He moonlights as a game designer and volunteer firefighter. This is his first novel.

"Locke's resilience and wit give the book the tragicomic air of a traditional picaresque, rubbery ethics and all."—Publishers Weekly

“Fafhrd and the Grey Mouser would have felt right at home with the Gentleman Bastards. They’re not out to save the world, just their own skins...oh, and to relieve some nobles of their gold, jewels, and silks along the way. This is a fresh, original, and engrossing tale by a bright new voice in the fantasy genre.  Locke Lamora makes for an engaging rogue, and Camorr a fascinating and gorgeously realized setting, a city to rival Lankhmar, Amber, and Viriconium.  I look forward to returning there for many more visits.”—George R. R. Martin

“Scott Lynch is a con man, a conjuror, a wickedly entertaining juggler of words with knives up his sleeves and hatchets down his back. By the time you realize he’s dangerous, you’re already bleeding. The Lies of Locke Lamora is a ticket inside the astonishing city-state Camorr, and a free pass into the company of the entirely extraordinary Gentleman Bastards, and a match for any fantasy adventure I’ve ever read. The best news is: it’s Book One. That means there’ll be more.”—Matthew Woodring Stover

"Among the year’s most impressive debuts ... Lynch immediately establishes himself as a gifted and fearless storyteller, unafraid of comparisons to Silverberg and Jordan, not to mention David Liss and even Dickens. Fans of lavishly appointed fantasy will be in seventh heaven here, but it will be nearly as popular with readers of literary crime fiction."—Booklist, starred review