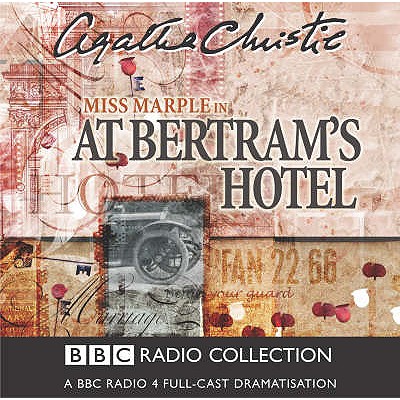 Jane Marple is being treated to a few days' holiday by her niece, staying at Bertram's Hotel a dignified establishment tucked away in a back street of busy Mayfair. It is a place where sedate upper-class ladies, retired military gentlemen, and the higher echelons of the clergy can indulge in the comforts of a bygone age. But Miss Marple begins to feel uneasy. Something sinister lurks beneath the polished veneer. Why are so many major crimes associated in some way with the hotel and those eminently respectable people staying there? Instead of rest and relaxation, Miss Marple finds herself hard at work as she attempts to discover what goes on behind closed doors. Sian Phillips and Maurice Denham are among the cast of this absorbing mystery, starring June Whitfield as Miss Marple.

Agatha Christie was born in 1890. During the World War I she worked as a hospital dispenser, where she gleaned the working knowledge of various poisons. Her first novel was The Mysterious Affair at Styles, published in 1920, followed over the next six years by four more detective novels and a short story collection. However, it was not until the publication of The Murder of Roger Ackroyd that Agatha Christie s reputation was firmly established. In 1930 the sharp-witted spinster sleuth Miss Marple made her first appearance in Murder at the Vicarage. In all, Agatha Christie published 80 crime novels and short story collections. As her play The Mousetrap (the longest-running play in the history of the theater) testifies, Agatha Christie s detective stories are likely to appeal for a long time to come. Agatha Christie was awarded a CBE in 1956 and was made a Dame of the British Empire in 1971. She died in 1976."