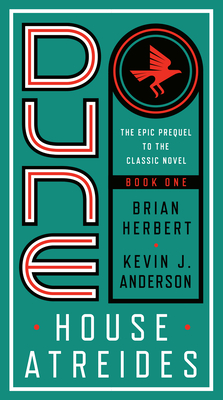 This is book number 1 in the Prelude to Dune series.

Step into the universe of Frank Herbert’s Dune, one of the greatest science fiction novels of all time.

Before Paul Atreides became Muad’Dib, the dynamic leader who unified the wild Fremen on the desert planet known as Dune . . .

Before the evil Baron Harkonnen overthrew House Atreides and sent Paul and his mother Jessica fleeing into the deadly wasteland of sand . . .

Before the secrets of the spice and the sandworms were discovered . . .

The tale of young Leto Atreides learning to become a ruler in the shadow of his great father.

The tale of Pardot Kynes, ambitious planetologist dispatched to the sands of Arrakis to understand the origins of the spice melange, the most valuable substance in the known universe.

And the tale of Crown Prince Shaddam Corrino, whose lust for power leads him to plot the assassination of his own father and to create a plan that will replace the spice and disrupt the Imperium forever . . .

Dune: House Atreides begins the epic worldwide bestselling trilogy that tells of the generation before Dune and sows the seeds for great heroes, vile enemies, and terrible tyrants.

Brian Herbert is the son of legendary science fiction author Frank Herbert and has written the definitive biography of him, Dreamer of Dune, a finalist for the Hugo Award. He has also written many highly imaginative novels, including The Timeweb Chronicles, the ecological fantasy Ocean (with his wife, Jan), The Little Green Book of Chairman Rahma, The Unborn, and The Assassination of Billy Jeeling. His earlier acclaimed novels include The Stolen Gospels, Sudanna, Sudanna, and Sidney’s Comet, as well as Man of Two Worlds (written with his father). Brian Herbert also co-manages the legacy of Frank Herbert and is an executive producer of the new motion picture Dune and the forthcoming TV series Dune: The Sisterhood. He and his wife live in Seattle, Washington.

Kevin J. Anderson has written in many genres: science fiction, epic fantasy, suspense/thriller, and humor. He is best known for his work in the Star Wars, X-Files, Batman, and Superman universes, as well as the space opera The Saga of Seven Suns; the epic fantasy Spine of the Dragon; his humorous Dan Shamble, Zombie P.I. series; and two steampunk fantasy adventures, Clockwork Angels and Clockwork Lives, written with legendary Rush drummer and lyricist Neil Peart. Anderson is creative consultant on the new Legendary motion picture of Dune and is co-producer of the forthcoming TV series Dune: The Sisterhood. He is the publisher of WordFire Press and also professor and director of the publishing MA program at Western Colorado University.

Together, Herbert and Anderson have written numerous international bestselling novels set in the universe of Frank Herbert’s Dune, as well as the definitive graphic novel adaptation of the classic Dune. They are the authors of an original epic science fiction trilogy, Hellhole, Hellhole Awakening, and Hellhole Inferno.

“Dune: House Atreides is a terrific prequel, but it’s also a first-rate adventure on its own. Frank Herbert would surely be delighted and proud of this continuation of his vision.”—Dean Koontz

“Every bit as complex as the original Dune novels.”—St. Petersburg Times