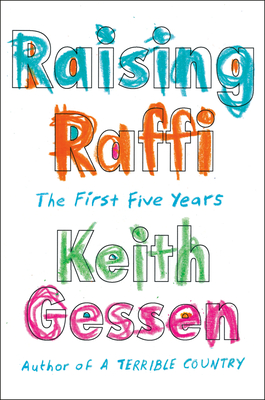 “Memoirs of fatherhood are rarely so honest or so blunt.” —Daniel Engber, The Atlantic

An unsparing, loving account of fatherhood and the surprising, magical, and maddening first five years of a son’s life

“I was not prepared to be a father—this much I knew.”

Keith Gessen was nearing forty and hadn’t given much thought to the idea of being a father. He assumed he would have kids, but couldn’t imagine what it would be like to be a parent, or what kind of parent he would be. Then, one Tuesday night in early June, the distant idea of fatherhood came careening into view: Raffi was born, a child as real and complex and demanding of his parents’ energy as he was singularly magical.

Fatherhood is another country: a place where the old concerns are swept away, where the ordering of time is reconstituted, where days unfold according to a child’s needs. Whatever rulebooks once existed for this sort of thing seem irrelevant or outdated. Overnight, Gessen’s perception of his neighborhood changes: suddenly there are flocks of other parents and babies, playgrounds, and schools that span entire blocks. Raffi is enchanting, as well as terrifying, and like all parents, Gessen wants to do what is best for his child. But he has no idea what that is.

Written over the first five years of Raffi’s life, Raising Raffi examines the profound, overwhelming, often maddening experience of being a dad. Gessen traces how the practical decisions one must make each day intersect with some of the weightiest concerns of our age: What does it mean to choose a school in a segregated city? How do you instill in your child a sense of his heritage without passing on that history’s darker sides? Is parental anger normal, possibly useful, or is it inevitably authoritarian and destructive? How do you get your kid to play sports? And what do you do, in a pandemic, when the whole world seems to fall apart? By turns hilarious and poignant, Raising Raffi is a story of what it means to invent the world anew.

Keith Gessen is the author of A Terrible Country and All the Sad Young Literary Men, and is a founding editor of n+1. He has translated or co-translated, from Russian, the work of Ludmilla Petrushevskaya, Kirill Medvedev, and Nobel Prize-winner Svetlana Alexievich's Voices from Chernobyl. A regular contributor to The New York Times Magazine, The New Yorker, and New York magazine, Gessen teaches journalism at Columbia and lives in New York with his wife, the novelist Emily Gould, and their two sons.

“A wise, mild and enviably lucid book about a chaotic scene. . . . Gessen is a calm and observant writer . . . who raises, and struggles with, the right questions about himself and the world.”
—Dwight Garner, The New York Times

“A father’s careful, piercing introspection, and a deep analysis of anger. . . . Gessen writes about his temperamental, trying son with a depth that can only come from years of loving observation. . . . Memoirs of fatherhood are rarely so honest or so blunt.”
—Daniel Engber, The Atlantic

“Raising Raffi is good. . . . Parents with toddlers prone to Raffi’s . . . particular brand of ‘uncivil disobedience’ might, like me, find themselves scribbling I FEEL SEEN on every other page. . . . Snappy, smart, relatable. . . . One of the most honest accounts of the rage a parent can feel when personally victimized by their small children, even as they love those children with stupefying tenderness.”
—Meghan Flaherty, Slate

“[Gessen] describes the surprising, joyful and often enervating experience of raising Raphael, his son with novelist Emily Gould. . . . Gessen can be funny and self-deprecating.”
—Mark Athitakis, The Los Angeles Times

“An incisive examination of parenthood—and childhood—written by one of the literary world’s finest.”
—Zibby Owens, Katie Couric Media

“Gessen’s writing about Raffi is sweet and exasperated and often quite funny.”
—Piper French, The Drift

“A promising addition to the dad-book canon.”
—Oliver Munday, The Atlantic

“Raising Raffi is Gessen’s own reckoning with the intellectual and emotional tumult of new fatherhood. . . . [The book] offers a sharp sense of wonder about the quotidian details of fatherhood.”
—Phillip Maciak, The New Republic

“This book is thoughtful, companionable, funny and memorable. Readers will return to it again and again—and will hope, like I do, that Gessen publishes a follow-up about Raffi’s next five years.”
—BookPage (starred review)

“Gessen renders the daunting frontier of new parenthood with tenderness and humility in these eloquent essays about rearing his first child. . . . New parents will find no shortage of laughs, cries, and solace here.”
—Publishers Weekly

“The book is engaging and better-written than many parenting books on the market. In addition, it is a fascinating look at the triumphs and struggles faced by a first-generation Russian immigrant.”
—Library Journal

“The early years of fatherhood recounted with humility. . . . From being a ‘three-year-old terrorist,’ Raffi evolved into a ‘willful, sometimes violent’ 4-year-old; a stubborn 5-year-old; and an ‘adorable, infuriating, mercurial’ 6-year-old. . . . A warm, candid parenting memoir.”
—Kirkus Reviews

“Novelist and critic Keith Gessen would be the first to admit he didn't set out to write a book of parenting advice, but young parents reading the nine frank but warmhearted essays that compose Raising Raffi will be happy he did, not least for the collection's reassuring message: you are not alone. . . . Anyone who's experienced the joys and challenges of parenting will find themselves savoring Keith Gessen's piquant observations on fatherhood. And if they pick up a useful tip or two from his hard-earned experience, that wouldn't be surprising either.”
—Harvey Freedenberg, Shelf Awareness

“My brother wrote a book about my nephew, and this book made me laugh and tear up. It’s a book about love: the love of a father for his child, of course, and also the love of an adult son for his parents (our parents), the love an emigre feels for the language (Russian) and culture (Soviet Jewish emigre) of his home. It’s a book about the way love makes us feel powerless one minute and strong the next. It’s a beautiful book, and you should read it.”
—Masha Gessen, National Book Award-winning author of The Future Is History

“Until recently, fatherhood was, in many places, an arm’s-length affair. In Raising Raffi, Keith Gessen puts the emerging phenomenon of engaged fatherhood on the literary map, with a raw, wry, introspective chronicle of the first five years of dad life. It is a story of Macy’s engagement rings, missing heartbeats, vaginal geysers, playground violence, Russian children’s literature, racially segregated schools, and more. It raises profound questions about what it means to raise a boy when the old ways of being a man have been discredited and the new ones have yet to saturate. If you are a father, want to be a father, have a father, or are thinking of leaving the father of your children, then this book is for you.”
—Anand Giridharadas, New York Times bestselling author of Winners Take All

“In this beautiful book, a father’s love and anxiety test themselves against the sometimes-dubious popular philosophies of parenting, the memories of Gessen’s own upbringing and the harsh interruption of real world events. Parents who have doubted themselves and tried to untangle the mystery of young humans—in other words, all parents—will recognize themselves in this vulnerable and finely wrought memoir.”
—Megan K. Stack, author of Women’s Work

“Keith Gessen is one my favorite writers, and Raising Raffi brings to bear everything I love about him: his fierce intellect and fiercer compassion, his deep reflection and pitch-perfect humor. This fatherhood shit ain’t easy, but Gessen might just help us make it through.”
—Adam Mansbach, #1 New York Times bestselling author of Go the F*ck to Sleep

“I didn't know I was waiting for a book like this until I read it. Raising Raffi is original, funny, and full of heart.”
—Daniel Alarcón, founder of Radio Ambulante and author of At Night We Walk in Circles

“I would read Keith Gessen writing about anything but having his curiosity trained on the thorny, existential subject of parenthood is pure heaven. I read this book about the neurosis (and the joy!) of the 21st-century parent in a fugue state, grateful to Gessen for his humor and insight.”
—Meaghan O'Connell, author of And Now We Have Everything