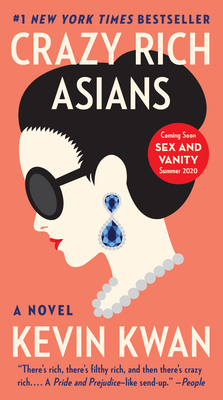 You can't buy happiness, it's true, but this book has me convinced that you can buy some pretty good substitutes! Kwan's talented debut is both a lush, detailed look at the lifestyles of the very wealthy (and very eccentric) and a romance that might not survive the culture shock. As soon as I opened the book I was transported to a foreign and very ritzy world — I wish I was crazy rich!

"There's rich, there's filthy rich, and then there's crazy rich ... A Pride and Prejudice-like send-up about an heir bringing his Chinese-American girlfriend home to meet his ancestor-obsessed family.” –PEOPLE

When New Yorker Rachel Chu agrees to spend the summer in Singapore with her boyfriend, Nicholas Young, she envisions a humble family home and quality time with the man she hopes to marry. But Nick has failed to give his girlfriend a few key details. One, that his childhood home looks like a palace; two, that he grew up riding in more private planes than cars; and three, that he just happens to be the country’s most eligible bachelor.

On Nick’s arm, Rachel may as well have a target on her back the second she steps off the plane, and soon, her relaxed vacation turns into an obstacle course of old money, new money, nosy relatives, and scheming social climbers.

“It’s impossible not to get sucked into this satirical novel about the jet-setting lives of an enormous busybody family and its infinite Louboutin collection.” —Glamour

“If this isn’t the funniest book so far this year, it’s up there. . . . Kwan, who grew up in Singapore, skewers his subjects deftly, stylishly, and completely—but with heart.” —The Denver Post

“Rachel’s squeaky-clean naiveté is a clever foil to the intricate workings of the high-glamour Asian set around her. Chinese on the outside but all-American on the inside, she allows us to see the myriad nuances of intra-Asian culture that the novel goes to great lengths to show.” —NPR

“Delightfully soapy. . . . [Crazy Rich Asians] eats its chiffon cake and has it too, simultaneously tut-tutting many of its characters for their vapid materialism while reveling in the milieu’s sybaritic excess.” —The Wall Street Journal