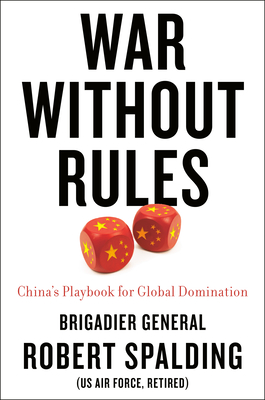 In its fight for global dominance, Communist China has thrown out the old rules of war. China expert General Robert Spalding walks us through their new playbook.


Many Americans are finally waking up to the alarming reality of China's stealth war on the United States and puzzling over how to push back against its insidious infiltration. What few realize is that we have one real advantage in this war: the Chinese Communist Party strategy for total war has been written out in Unrestricted Warfare, the Chinese book, well known there, that has become their new Art of War.

In War Without Rules, retired Air Force Brigadier General Rob Spalding takes Americans inside Unrestricted Warfare. He  walks readers through the principles of this book, revealing the Chinese belief that there is no sector of life outside the realm of war. He shows how the CCP itself has promised to use corporate espionage, global pandemics, and trade violations to achieve dominance. Most importantly, he provides insight into how, once Americans are aware of the tactics, we can fight back against CCP’s creeping influence.
More than a vital read for those interested in China, War Without Rules is essential reading for anyone—from policymakers and diplomats to businessmen and investors—finally waking up to the stealth war. Knowledge is power, and it’s time to arm yourself.

Robert Spalding retired from the U.S. Air Force as a brigadier general after more than 25 years of service. The author of Stealth War, he is a former China strategist for the chairman of the Joint Chiefs of Staff and the Joint Staff at the Pentagon, as well as a senior defense official and defense attaché to China. He earned his doctorate in economics and mathematics from the University of Missouri and is fluent in Mandarin.