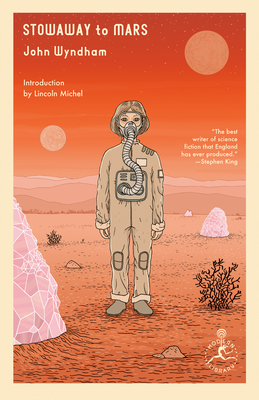 A space opera set on Mars by one of the twentieth century’s most brilliant—and neglected—science fiction and horror writers, whom Stephen King called “the best writer of science fiction that England has ever produced.”

An international prize is offered to the first man to complete an interplanetary journey. For British pilot Dale Curtance, it is the ultimate challenge; he must build a ship, assemble a top-notch crew, and beat the Russians and the Americans, too. Soon the Gloria Mundi heads for Mars. There’s only one problem: a stowaway named Joan Shirning.

At first, the men resent Joan’s presence. But they come to realize that she is the only one who has firsthand knowledge of the Martians—or at least the intelligent beings that will one day replace them. . . .

John Wyndham (1903–1969) is considered a pioneer of science fiction and horror, though he preferred to think of himself as a “logical fantasist.” He began writing science fiction and detective stories in the 1920s, but shifted to science fiction post-WWII, focusing on themes of disaster, invasion, and first contact. His best-known works include The Day of the Triffids (1951) and The Midwich Cuckoos (1957). A pacifist and socialist, Wyndham was alive to the impact of sexism, classism, and prejudice and his novels reflect his liberal politics.

“The best writer of science fiction that England has ever produced.”—Stephen King

“Wyndham was a true English visionary, a William Blake with a science doctorate.”—David Mitchell

“[Wyndham] did more than any other British writer since H. G. Wells to make science fiction popular. . . . His plots, however fantastic, were characterized by inventiveness, clarity and a profound sympathy for mankind.”—The New York Times

“[John Wyndham] singlehandedly invented a whole pile of sub-genres of science fiction. It’s as if . . . he was plugged in to the world’s subconscious fears and articulated them one by one in short, amazingly readable novels.”—Jo Walton