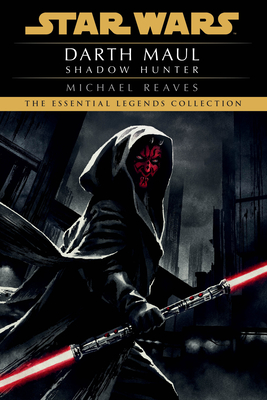 NEW YORK TIMES BESTSELLER • For the infamous, power-hungry Sith, beholden to the dark side, the time has come to rise again.

“Full of lightsaber battles, the Jedi philosophy, and lots of new life-forms.”—Chicago Sun-Times

After years of waiting in the shadows, Darth Sidious is taking the first step in his master plan to bring the Republic to its knees. Key to his scheme are the Neimoidians of the Trade Federation. Then one of his Neimoidian contacts disappears, and Sidious does not need his Force-honed instincts to suspect betrayal. He orders his apprentice, Darth Maul, to hunt the traitor down.

But he is too late. The secret has already passed into the hands of information broker Lorn Pavan, which places him right at the top of Darth Maul’s hit list. Then, in the labyrinthine alleyways and sewers of Coruscant, capital city of the Republic, Lorn crosses paths with Darsha Assant, a Jedi Padawan on a mission to earn her Knighthood.

Now the future of the Republic depends on Darsha and Lorn. But how can an untried Jedi and an ordinary man, stranger to the powerful ways of the Force, hope to triumph over one of the deadliest killers in the galaxy?

Michael Reaves received an Emmy Award for his work on the Batman television animated series. He has worked for Spielberg’s DreamWorks, among other studios, and has written fantasy novels and supernatural thrillers. Reaves is the New York Times bestselling author of Star Wars: Darth Maul: Shadow Hunter and the first two Star Wars: Coruscant Nights novels Jedi Twilight and Street of Shadows. He is also the co-writer (with Maya Kaathryn Bohnhoff) of the last two Star Wars: Coruscant Nights novels—Patterns of Force and The Last Jedi—and Star Wars: Shadow Games, as well as (with Steve Perry) Star Wars: Death Star and the Star Wars: MedStar novels Battle Surgeons and Jedi Healer. He lives in the Los Angeles area.

“Reaves writes with a creative flair, allowing readers to experience an almost cinematic sensation as they move through the story. The language is colorful, the action scenes are dynamic, and the dialogue is realistic. . . . Shadow Hunter is a very good Star Wars novel that reads as easily as a comic book. . . . Reaves does an excellent job.”—Winston-Salem Journal