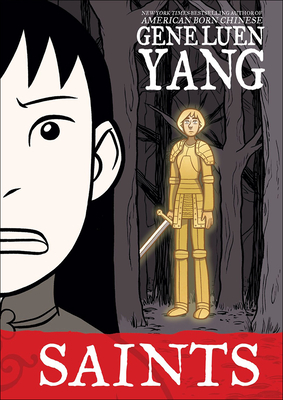 This is book number 2 in the Boxers & Saints series.

China, 1898. An unwanted fourth daughter, Four-Girl isn't even given a proper name by her family. She finds friendship--and a name, Vibiana--in the most unlikely of places: Christianity. But China is a dangerous place for Christians. The Boxer Rebellion is murdering Westerners and Chinese Christians alike. Torn between her nation and her Christian friends, Vibiana will have to decide where her true loyalties lie . . . and whether she is willing to die for her faith. "----""Boxers & Saints" is a groundbreaking novel in two volumes. This innovative format presents two parallel tales about young people caught up on opposite sides of a violent rift. "Saints "tells Vibiana's story, and the companion volume, "Boxers," tells the story of Little Bao, a young man who joins the Boxer Rebellion. "American Born Chinese" author Gene Luen Yang brings his trademark magical realism to the complexities of the Boxer Rebellion, and lays bare the universal foundations of extremism, rebellion, and faith.

Gene Luen Yang began drawing comic books in the fifth grade. He was an established figure in the indie comics scene when he published his first book with First Second, "American Born Chinese, "which is now in print in over ten languages. "American Born Chinese'"s critical and commercial success, along with its status as a National Book Award finalist and winner of the Printz Award, catapulted Yang into stardom as a major voice of our times.