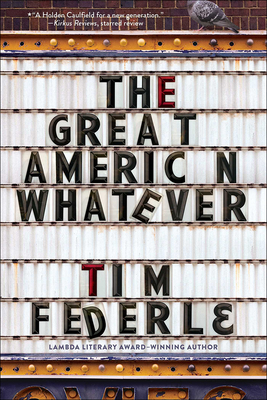 From the award-winning author of Five, Six, Seven, Nate and Better Nate Than Ever comes a Holden Caulfield for a new generation (Kirkus Reviews, starred review).
Quinn Roberts is a sixteen-year-old smart aleck and Hollywood hopeful whose only worry used to be writing convincing dialogue for the movies he made with his sister Annabeth. Of course, that was all before before Quinn stopped going to school, before his mom started sleeping on the sofa and before the car accident that changed everything.
Enter: Geoff, Quinn's best friend who insists it's time that Quinn came out at least from hibernation. One haircut later, Geoff drags Quinn to his first college party, where instead of nursing his pain, he meets a guy okay, a hot guy and falls, hard. What follows is an upside-down week in which Quinn begins imagining his future as a screenplay that might actually have a happily-ever-after ending if, that is, he can finally step back into the starring role of his own life story.
My Account • Sign In • Sign Out • Register
NEW & USED BOOKS
AUTHOR EVENTS • GIFTS
Tempe
6428 South McClintock Drive
480.730.0205
[Google Map]
10am-7pm daily
10am-5pm New Year's Eve
Closed New Year's Day