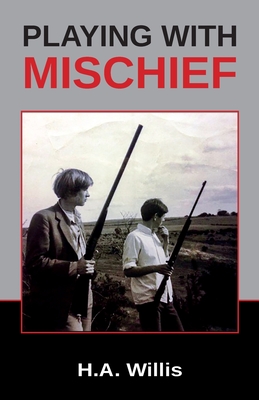 In an Australian country town in the mid-1960s, a couple of adolescent boys are busy experimenting with incendiary devices while their town, including their school, is suffering a series of arson attacks. Are the boys responsible? At least, in part? Or is there something larger afoot? And how did it all go so dreadfully wrong?

Meanwhile, in a small city not far away, another group of boys, somehow connected to those in the other place, get up to their own mischief playing with fire. This, too, with a whiff of the infernal, goes badly.

The interlocking stories of Playing with Mischief are an exercise in smoke and mirrors. Along with real smoke, of which there is plenty, the stories are infused with a figurative smoke that obscures who is responsible for what. As to mirrors, consider the manner in which the diverse perspectives of these stories reflect back through one another. And then, beyond such obvious references, we should consider fiction's overarching artifice, in which Willis saw an affinity to the legerdemain of fairground magicians, the archetypical practitioners of smoke and mirrors.

Playing with Mischief (the title itself suggests an alternative: Playing with Fire) is also an exercise in stylistic variation. The paired novellas, Mischief and The Fires, third and first person narratives respectively, are bookended by the shorter pieces, Invocation and The Exercise Book, distinctly at opposite ends of the stylistic spectrum. These different, to some extent contending voices enhance the basic mirroring effect between the competing narratives. Or, to shift the metaphor, they create a space in which whispered implications echo.

An invocation of a world gone by, a world in which ghosts still wandered foggy streets and sometimes it was better to consult a priest than a doctor.

An Australian country town in the mid-1960s.

A series of suspicious fires.

Where the fuse led was clear, but who struck the match was not so evident.