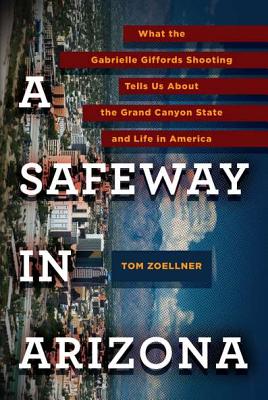 A riveting account of the state of Arizona, seen through the lens of the Tucson shootings

On January 8, 2011, twenty-two-year-old Jared Lee Loughner opened fire at a Tucson meet-and-greet held by U.S. Representative Gabrielle Giffords. The incident left six people dead and eighteen injured, including Giffords, whom he shot in the head.

Award-winning author and fifth generation Arizonan Tom Zoellner, a longtime friend of Giffords's and a field organizer on her Congressional campaign, uses the tragedy as a jumping-off point to expose the fault lines in Arizona's political and socioeconomic landscape that allowed this to happen: the harmful political rhetoric, the inept state government, the lingering effects of the housing market's boom and bust, the proliferation and accessibility of guns, the lack of established communities, and the hysteria surrounding issues of race and immigration. Zoellner's account includes interviews with those directly involved and effected, including Arizona's controversial Sheriff Joe Arpaio.

Zoellner offers a revealing portrait of the Southwestern state at a critical moment in history- and as a symbol of the nation's discontents and uncertainties. Ultimately, it is his rallying cry for a saner, more civil way of life.

Tom Zoellner has worked as a contributing editor for Men s Health magazine and as a reporter for the San Francisco Chronicle. His book The Heartless Stone: A Journey Through the World of Diamonds and Desire will be published in the summer of 2006."

“A Safeway in Arizona, is Zoellner's quirky, uneven, brave and astonishingly heartfelt attempt to make sense of the Saturday-morning massacre…he carefully and convincingly treads new ground and concludes that “events-especially violent ones-never happen in a vacuum.”…it’s [Zoellner’s] love for both Giffords and Arizona that makes A Safeway in Arizona so compelling a read.”
-San Francisco Chronicle

“[A] book that embraces an almost thriller-style narrative structure…A Safeway in Arizona is a masterly work of reporting, historical analysis, and sly cultural criticism.”
-The Boston Globe

“[A] nuanced book that [Zoellner] is unusually (probably uniquely) qualified to write…Readers outside Arizona should find plenty to admire in this book—including Zoellner’s deep investigation into Loughner’s life; the narrative of the author’s friendship with Giffords; the thoughtful treatment of gun control as an explosive socioeconomic-political issue fueled by demagogues across the desert terrain; and the explication of how the builders of Tucson and other Arizona locales seem to have failed miserably in making community possible, thus creating a breeding ground for structural dysfunction.”
-The Houston Chronicle

“No one has probed the terrain around the Tucson shooting better than author and journalist Tom Zoellner…Zoellner set out to transcend the endless political banter over blame and explores the social contexts underscoring how Giffords’ act of democratic participation–”reaching out to strangers at the fringe of a Safeway”–could lead to one of the most disturbing assassination attempts in recent history.  In the process, Zoellner asks a lot of questions most Arizonans would prefer to ignore.”
-Salon.com

“There’s a gaping gulf between the shooting itself and the glib remembrances that make it into the news. Tom Zoellner’s new book about the shooting, A Safeway in Arizona, almost fixes this.”
-Slate.com

"Tom Zoellner's remarkable book about a moment of tragedy in Arizona ends up a story of survival--a wounded Congresswoman's survival, and a wounded nation's survival as well."
--Richard Rodriguez, author of Brown: The Last Discovery of America

"Zoellner brilliantly evokes the past and present of Arizona, the outsized personalities that have shaped the state and the paranoia lurking at the edge of society. A sure-to-be-controversial, troubling tale of the wages of fear on the body politic."
--Kirkus Reviews