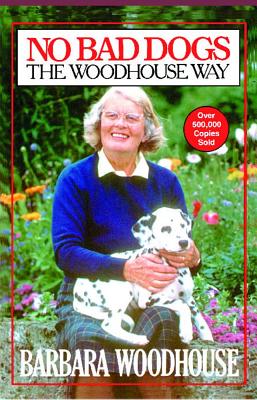 Barbara Woodhouse, "the lady with the dogs," is already familiar to millions of Americans through the publication of her best-selling book, No Bad Dogs, her frequent appearances on such national television shows as "60 Minutes," "The Tonight Show," "Donahue," "Merv Griffin," "Good Morning America," and the syndication of her enormously popular television series, "Training Dogs the Woodhouse Way."
There are no bad dogs, Barbara Woodhouse believes -- only inexperienced owners. She ought to know: in thirty years she has personally trained 17,000 dogs and their owners in her weekend courses, teaching perfect obedience to basic commands in only six and a half hours.
In this irresistible book, Barbara Woodhouse passes on to the reader the simple, effective techniques as well as the infectious, positive attitude that have enabled her to make the most unruly or nervous dog happily obedient -- sometimes within a few minutes, as astonished television audiences can attest.
No Bad Dogs will leave every dog owner with both the skills and the indispensable attitude of love, firmness, and enthusiasm that gets results -- The Woodhouse Way.

Barbara Woodhouse, "the lady with the dogs," is already familiar to millions of Americans through her appearances on CBS' "60 Minutes" and the U.S. syndication of her enormously popular BBC television series, "Training Dogs the Woodhouse Way." Born in Dublin in 1910 and raised in Oxford, England, Barbara spent three years during the 1930s on a cattle ranch in Argentina where her extraordinary gift with animals enabled her to break in hundreds of wild horses. Married to Dr. Michael Woodhouse on her return to England, where they now live, Barbara has raised three children, run a farm, bred and broken horses, and trained 17,000 dogs on her famous weekend courses which teach perfect obedience to basic commands in only six and a half hours. Her Great Danes, Juno and Junia, made more than 100 film and TV appearances, and her own films, records, television series and books have earned her international popularity.