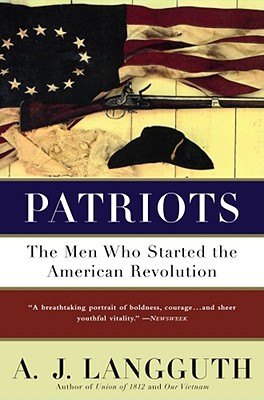 With meticulous research and page-turning suspense, Patriots brings to life the American Revolution—the battles, the treacheries, and the dynamic personalities of the men who forged our freedom.

George Washington, John Adams, Samuel Adams, Ben Franklin, Thomas Jefferson, Patrick Henry—these heroes were men of intellect, passion, and ambition. From the secret meetings of the Sons of Liberty to the final victory at Yorktown and the new Congress, Patriots vividly re-creates one of history's great eras.

A. J. Langguth (1933–2014) was the author of eight books of nonfiction and three novels. After Lincoln marks his fourth book in a series that began in 1988 with Patriots: The Men Who Started the American Revolution. He served as a Saigon bureau chief for the New York Times, after covering the Civil Rights movement for the newspaper. Langguth taught for three decades at the University of Southern California and retired in 2003 as emeritus professor in the Annenberg School for Communication and Journalism.

"The winning of the American Revolution in all its glory, gore, and mortal frailty"
— Los Angeles Times

"History as it should be written -- with illuminating insight into character, a sweeping narration of events, and a splendid eye for detail."
— Doris Kearns Goodwin, author of Team of Rivals

"With bold colors and unremitting pace, Patriots recaptures the drama and vital importance of the American Revolution and the towering figures who waged it."
— Michael Beschloss, author of Kennedy and Roosevelt