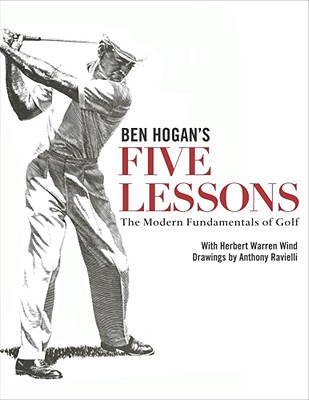 A timeless classic with nearly one million copies in print, Ben Hogan’s Five Lessons outlines the building blocks of winning golf from one of the all-time masters of the sport—fully illustrated with drawings and diagrams to improve your game instantly.

Ben Hogan, one of the greatest golfers in the history of the sport, believed that any golfer with average coordination can learn to break eighty—if one applies oneself patiently and intelligently. With the techniques revealed in this classic book, you can learn how to make your game work from tee to green, step-by-step and stroke by stroke.

In each chapter, a different experience-tested fundamental is explained and demonstrated with clear illustrations—as though Hogan were giving you a personal lesson with the same skill and precision that made him a legend. Whether you’re a novice player or an experienced pro, Ben Hogan’s Five Lessons is a must-have reference for anyone who knows that fundamentals are where champions begin.

Ben Hogan discovered golf as a fifteen-year-old caddie. He turned pro at seventeen, joined the tour full-time as a nineteen-year-old in 1931, and has won nine pro majors. A four-time PGA Player of the Year, he is one of only four golfers to win all four professional majors. At forty-one, he won five of six tournaments, including the Masters, U.S. Open and the British Open. Hogan died at eighty-four in 1997 in his home in Fort Worth.

Jim Fogerty Professional, Sunset Country Club, St. Louis Most articles on golf deal only in theory, but Ben is to be congratulated on probably the most practical series on golf instruction ever written.

Timothy E. Sick Calgary After reading the first two articles, I had a 73 for the first time in my life, and hadn't played for six months before that.

Frank Sadler Professional, Bellingham Country Club, Bellingham, Washington It's the first time words and illustrations have made golfing technique absolutely clear. I'm applying the lessons to my teaching program here and highly recommending them to my pupils. I'd say it's the greatest instruction series of all time. Women are particularly keen on it. It'll make a lot of new golfers -- good golfers.