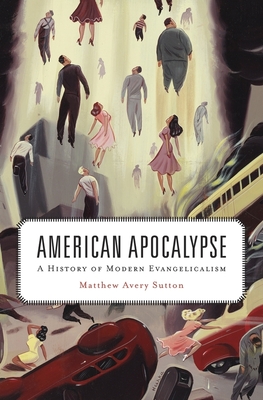 By Matthew Avery Sutton
$23.50
Not Available In-Store - Usually Ships from Warehouse in 1-5 Days

Radical Evangelical Christians make up one of the strongest social and political groups in America, made clear by the last election. A tribe forged in revolution and orthodoxy, cemented during a time when many saw the end all around them. Understanding the motivations of this influential group can be confounding. This is essential reading for everyone who wants to be involved in politics today from the kitchen table to the courthouse.

The first comprehensive history of modern American evangelicalism to appear in a generation, American Apocalypse shows how a group of radical Protestants, anticipating the end of the world, paradoxically transformed it.

"The history Sutton assembles is rich, and the connections are startling."
--New Yorker

"American Apocalypse relentlessly and impressively shows how evangelicals have interpreted almost every domestic or international crisis in relation to Christ's return and his judgment upon the wicked...Sutton sees one of the most troubling aspects of evangelical influence in the spread of the apocalyptic outlook among Republican politicians with the rise of the Religious Right...American Apocalypse clearly shows just how popular evangelical apocalypticism has been and, during the Cold War, how the combination of odd belief and political power could produce a sleepless night or two."
--D. G. Hart, Wall Street Journal

"American Apocalypse is the best history of American evangelicalism I've read in some time...If you want to understand why compromise has become a dirty word in the GOP today and how cultural politics is splitting the nation apart, American Apocalypse is an excellent place to start."
--Stephen Prothero, Bookforum