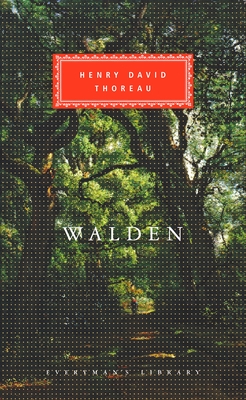 By virtue of its casual, off-handedly brilliant wisdom and the easy splendor of its nature writing, Thoreau’s account of his adventure in self-reliance on the shores of a pond in Massachusetts is one of the signposts by which the modern mind has located itself in an increasingly bewildering world. Deeply sane, invigorating in its awareness of humanity’s place in the moral and natural order, Walden represents the progressive spirit of nineteenth-century America at its eloquent best.

Henry David Thoreau was born on July 12, 1817, in Concord, Massachusetts. His father worked successively as a farmer, a grocer, and a manufacturer of pencils, and the family was frequently in difficult financial straits. After studying locally, Thoreau won admission to Harvard. When Ralph Waldo Emerson moved to Concord in 1835, Thoreau formed a close relationship with him (although the friendship would later give way to mutual criticism) and with others associated with the Transcendentalist group, including Margaret Fuller, Orestes Brownson, Bronson Alcott, Jones Very, and Theodore Parker. He worked in his father's pencil business while keeping the journals that would become his life's work, running to millions of words.

Thoreau took over the Concord Academy for several years, where he taught foreign languages and science, before closing the school in 1841. By now he was regularly publishing poems and essays in The Dial. For a time he worked in Emerson's household as a handyman, and in 1845 he built a cabin on some property of Emerson's at Walden Pond, staying for a little over two years: 'My purpose in going to Walden Pond was not to live cheaply nor to live dearly there, but to transact some private business with the fewest obstacles.' (During this time he maintained an active social life in Concord.) He spent a night in jail in 1846 as a protest against slavery, and later explained his motives in the essay 'Civil Disobedience' (1849). His first book, A Week on the Concord and Merrimack Rivers (1849), most of which had been written at Walden Pond, was based on a boat trip he took some years earlier with his brother. The book made little impact and sold only a few hundred copies.

Thoreau--who at this time was supporting himself as a surveyor--became increasingly involved in the Abolitionist movement and began to work for the Underground Railroad, sheltering escaped slaves en route to Canada.

Walden, on which he had been working ever since his residence at the pond, went through multiple revisions before he considered it ready for publication. This was intended as the fullest expression of his philosophy: 'Be a Columbus to whole new continents and worlds within you, opening new channels, not of trade, but of thought. Every man is the lord of a realm beside which the earthly empire of the Czar is but a petty state, a hummock left by the ice.' It was published in 1854 and proved unexpectedly successful.

Thoreau met John Brown in 1857, and following Brown's raid on Harper's Ferry delivered 'A Plea for Captain John Brown' in his defense: 'I know that the mass of my countrymen think that the only righteous use that can be made of Sharpe's rifles and revolvers is to fight duels with them, when we are insulted by other nations, or to hunt Indians, or shoot fugitive slaves with them, or the like. I think that for once the Sharpe's rifles and the revolvers were employed in a righteous cause.' For many years Thoreau had been at work on a projected study of American Indians, compiling thousands of pages of notes and extracts, and in 1861 he traveled to Minnesota, where he visited the Lower Sioux Agency at Redwood. By this time, however, he had contracted tuberculosis and it became clear that he would not live long; he died on May 6, 1862. His later travel writings, The Maine Woods (1864) and Cape Cod (1865), were published posthumously.